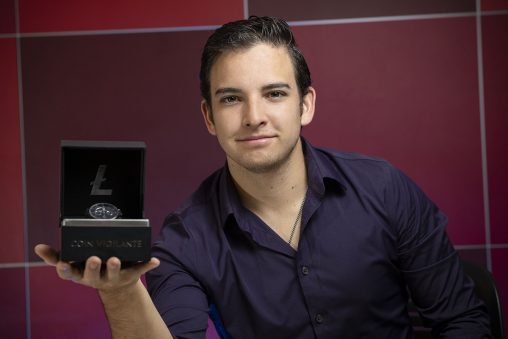 The fuel for his fire was getting a bachelor’s degree in international business from Wright State University. And that fire was the desire to start his own company that sells a luxury wristwatch that makes a statement.

Carlos Estrada — and fellow Wright State graduate Hannah Jones — are launching Coin Vigilante, which sells Bitcoin and Litecoin-branded watches to help promote the decentralized cryptocurrency that can be sent from user to user without the need for banks or other intermediaries.

Estrada is an avid supporter of cryptocurrencies and decentralized finance.

Two years ago he had a “lightbulb moment,” coming up with the idea to make a product that reminds people of the importance of time and money.

“I figured why not a watch?” he said. “And Bitcoin is money. So I tried to make that connection.”

Estrada, who is from Mexico, comes from a family of entrepreneurs. His mother owns a tennis shop, and Jones’ parents are also small-business owners.

Estrada initially pursued mechanical engineering at the University of Dayton. But he transferred to Wright State to play on the tennis team and switched his major to international business, in part because it was in his DNA.

“If I wouldn’t have made that decision to come here, this company wouldn’t be here,” he said. “It couldn’t have been done without Wright State because of the international business class.”

One of his professors ran multiple start-up businesses and taught his students how to arrange manufacturing, shipping and other aspects of the business.

“And I’ve actually been in touch with him, which is one of the best parts,” said Estrada. “These professors, they don’t just teach you and say ‘See you later’ after you graduate. One of my professors actually took part in one of my podcasts.”

Both Estrada and Jones, his fiancé, graduated from Wright State with bachelor’s degrees – Estrada with a degree in international business in 2020 and Jones with degrees in entrepreneurship and management in 2021.

Jinhwan Jo, Ph.D., assistant professor of management and international business, had Jones in two of his classes. He said he was impressed with the practical help that Jones would give her classmates.

“I think her willingness to give others practical support can make her business grow and thrive,” he said.

After his “lightbulb moment,” Estrada spend five months learning how to design and produce the watch.

“This started from a far-fetched idea. People were thinking I was crazy,” he said. “It was a two-year project that is finally coming to fruition.” 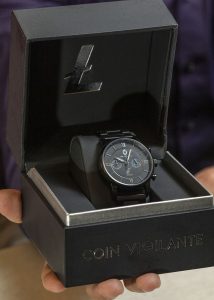 “But there is really no authenticity to a lot of the watches that you see,” he said. “That’s why I wanted to make something to carry a message. Every person who buys this watch is a person who is in that movement of respect for time and money. That’s the narrative.”

The watches are chronographic, with multiple systems to track different sets of time. One of the watches features a sleek black face with silver hands and Roman numerals. Hidden messages on the back relate to time and money. There are eight versions with different colors.

The watches are essentially a tribute to the Bitcoin and Litecoin cryptocurrencies, and they represent the movement for the appreciation of sound money.

“With people who are kind of nerdy with crypto and Bitcoin, they get it. It’s this niche market,” said Estrada. “It’s a Bitcoin-inspired watch.”

Estrada and Jones have been using the crowdfunding platform Kickstarter to raise money for their start-up company. Their 30-day funding goal of $25,000 was achieved in just four days and ended with $96,154, a total of 228 backers and more than 400 watches sold.

“It’s a huge win,” said Estrada. “It just shows there is a market for it. There are people who want it. It means something to them. We’re excited. It’s pretty much a dream come true.”

Estrada’s advice to Wright State business students or graduates looking to start up a company is that there is no secret recipe, no secret method of doing it.

“All you’ve got to do is commit to something, be willing to just put in the work, and eventually something will work out,” he said.