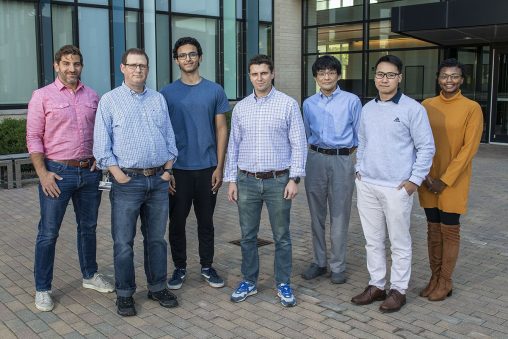 Wright State University researchers have identified a molecule that disrupts a highly specialized structure in neurons from the brain, a finding that could broaden the understanding of neurological complications in diseases.

The research, led by postdoctoral researcher Ryan Griggs, Ph.D., and graduate physiology and neuroscience student Duc Nguyen in the Department of Neuroscience, Cell Biology and Physiology, was published in eNeuro, a peer-reviewed scientific journal produced by the Society for Neuroscience.

“These findings could significantly impact the understanding of neurological complications in several disease states and are of broad pathophysiological relevance,” the researchers wrote.

Griggs said the team is passionate about studying the connection between neuronal structure and function and how that relationship is changed in diseases of the nervous system.

“We believe that neurological diseases may be caused by small changes in neurons within the brain that alter their normal function,” he said.

The research project focused on networks of neuronal cells and their connectivity. Griggs said that to develop new disease-modifying treatments for neurological disease, as opposed to just treating the symptoms, the mechanisms that initiate and maintain nervous system function and dysfunction must be understood at the network level.

The Wright State researchers recently discovered similar changes in the axon initial segment in the brains of mice with type 2 diabetes. These findings were published in 2018 and 2019 by Leonid Yermakov, Ph.D., when he was an M.D./Ph.D. student in the Susuki lab.

The researchers thought a factor that could be involved is a molecule called methylglyoxal, which is produced in the cells of the body when they break down glucose. Studies show that methylglyoxal is elevated in patients with diabetes.

“Our research is one of the first studies to clearly identify a disease factor — methylglyoxal — that initiates disruption of a critical, highly specialized structure within neurons, the axon initial segment,” Griggs said.

The researchers added methylglyoxal to neuronal cultures and found that the length of the axon initial segment was reduced, a subtle yet potentially meaningful structural change. Importantly, they said, the amount of methylglyoxal they added likely represents the elevated levels of methylglyoxal present in patients or mice with type 2 diabetes.

Exposing the cells to methylglyoxal led to functional neuronal changes at both the cellular and network level. The researchers observed reduced activity in networks of neurons and altered excitability in single neurons after exposing the cultures to methylglyoxal for three hours. But those changes were absent or had recovered within 24 hours.

“These results were contradictory to our initial thinking that structural changes in the axon initial segment, such as shortening of its length, would occur at the same time as neuronal dysfunction,” said Griggs. “Our future research aims to both determine how methylglyoxal mediates these structural and functional changes and to explain the apparent mismatch in the temporal relationship between the disruption of neuronal structure and function we observed.”

Griggs said the most challenging part of the research was getting experiments going using newly learned techniques like neuronal cell culture and multi-electrode array electrophysiological recordings.

“But we had help,” he said. “We collaborated with professor Peter Wenner, Ph.D., and instructor Carlos Gonzalez-Islas, Ph.D., at Emory University. They performed the cellular electrophysiological recordings and helped us interpret our results and write the paper.”

“We now have all the resources in place to delve deeper into the hypothesis that methylglyoxal is the key mediator of axon initial segment disruption in type 2 diabetes using all our newly established techniques and tools,” Griggs added. “It’s really the dedicated students and the collaborative and supportive research community at Wright State that made this study possible.”