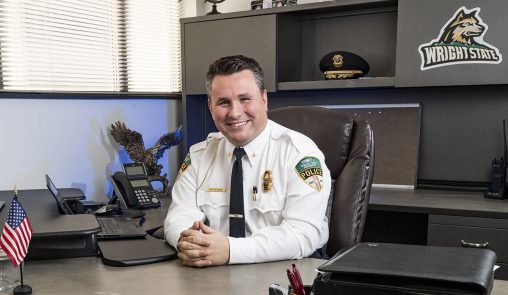 Kurt Holden, a two-time Wright State graduate and 13-year veteran of the university police force, has been named director of public safety.

Growing up in inner-city Dayton, Kurt Holden would often talk to police officers patrolling the streets. He saw how they worked to find solutions to problems, and he came to see police work as problem-solving.

“I said I want to be a police officer so I can help out,” he said.

On Dec. 1, the 35-year-old Holden was named director of public safety at Wright State University, overseeing the Police Department and several complementary units in the newly formed Department of Public Safety.

The department employs 12 patrol officers, several part-time detectives, six dispatchers, and teams of officers for community policing and special events. It also employs an administrative lieutenant, records technician and two parking attendants and a Customer Care Center supervisor. The department has a total of six police cars, enabling the use of two per shift.

“We have a small team, but it’s a very efficient team,” said Holden. “They are very, very talented at what they do.”

Holden should know. The two-time Wright State graduate is a 13-year veteran of the university’s police force. He climbed the ladder in the department, earning promotions to sergeant, patrol lieutenant and then interim director of public safety. He also helped start the department’s first K-9 program and later became a departmental trainer.

Holden said his childhood of living in foster homes has given him a unique perspective as director of public safety.

“I think it’s taught me empathy,” he said. “I’ve honestly learned you can do more in the community with a helping hand than you can with handcuffs.”

Holden was placed in foster care when he was 2 and lived in foster homes until he was emancipated at age 18. During that time, he learned that foster children have a higher high school dropout rate and only about 2-3% earn college degrees.

“But in my last foster home I had a really great foster father,” he said. “He brought me in, treated me like his own kids.”

He also taught Holden that while Holden can’t control what happened in the past, he can control his future path.

In 2004, after being emancipated, Holden decided to enroll at Wright State so he would have a place to live. But he struggled academically, skipped classes and flunked out after a year-and-a-half.

After Holden’s younger brother was emancipated from foster care, the two got an apartment together.

“That was the first time in my life I thought, ‘You know, I do not have to leave home,'” Holden said. “This is the first home that if I choose to leave I have full control.’”

Holden worked multiple jobs, everything from restaurant to security work.

“But I thought that if I’m ever going to get to where I want to be in life, I need to go school,” he said.

So Holden enrolled at Sinclair Community College, where he carried a 3.4 grade point average and in 2008 graduated with an associate degree in criminal justice.

He went through the Sinclair Police Academy, was offered several police jobs and accepted the one from Wright State. He also went back to the classroom at Wright State and in 2013 earned his bachelor’s degree in organizational leadership.

Holden said he felt comfortable at Wright State as a nontraditional student because there were many of them at the university.

“When I would walk through the library or through some of the identity centers, I would just start a conversation,” he recalled. “I was shocked to see how similar many of us were once we engaged in conversation.”

Holden later earned his master’s degree in leadership development in 2015.

“I wanted to prove to myself and to other kids who were in my same situation that you can do this,” he said.

Holden has received numerous awards during his career at Wright State, including the Mark Losey Ohio Distinguished Law Enforcement Award, a President’s Award for Excellence in Leadership, Dayton Business Journal Forty Under 40 and a Blue Coat Award for service to emancipated foster students.

Under Holden’s leadership, the new Department of Public Safety will continue the personal touch in its mission to provide a safe and secure educational environment.

The officers have made a point to be highly visible on campus. Some students even know them by name. Once a month, officers visit Mini U to have lunch with the children and read books to them.

Holden himself often strolls the Dayton Campus on foot during his lunch hour, greeting students, faculty and staff along the way. He also has a growing reputation on the basketball court as a deadly three-point shooter.

He plans to start a student security program in which students will work with the Department of Public Safety and help with such things as writing parking tickets, unlocking car doors for owners and jump-starting vehicles with dead batteries.

Holden said the most gratifying part of the job is seeing people smile or wave and getting a complimentary email, phone call or text.

“You have to be a really good listener and make yourself available to students, staff and faculty,” he said. “You’ll be shocked at what kind of difference you can make.”