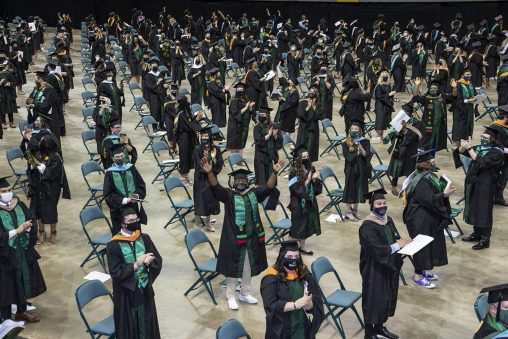 Wright State will hold commencement ceremonies in the Wright State Nutter Center for its Graduate School on Friday, Dec. 10, at 7 p.m., and for undergraduate students on Saturday, Dec. 11, at 10 a.m.

They join more than 115,000 alumni who are making a difference throughout Raider Country, all over Ohio, across the nation and around the world.

Tickets are required to attend the ceremonies. University health and safety protocols, including the campus mask requirements and physical distancing, will be observed at both ceremonies.

The commencement ceremonies can be watched online at wright.edu/streaming and on the university’s Facebook page and YouTube channel.

The summer and fall classes of 2021 include graduates with 749 bachelor’s degrees, 360 master’s degrees, 53 doctoral degrees and 19 associate degrees. 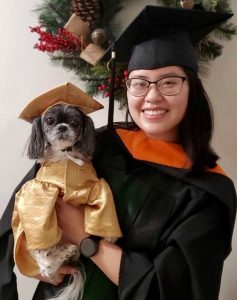 Kara Combs will graduate with a master’s degree in industrial and human factors engineering.

Combs was recently named a Laureate by Tau Beta Pi for her service, a highly prestigious honor. It was the third award she received from the national college engineering honor society. Previously, she received a highly competitive Tau Beta Pi fellowship for advanced study and in 2019 received an undergraduate scholarship.

Earlier this year, Combs received the James W. Barany Student Award for Excellence from the Institute of Industrial and Systems Engineers. The award recognizes undergraduate students who have brought distinction to industrial engineering at their universities.

After graduation, Combs plans to work at Wright-Patterson Air Force Base and enroll in a Ph.D. program. She intends to stay involved in the Dayton community by volunteering with professional societies and local organizations. 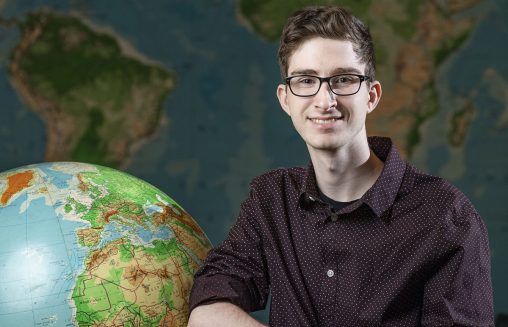 Benjamin Siefert will receive bachelor’s degrees in supply chain management and in French.

The Bellbrook High School graduate decided to major in supply chain management because he had an interest in logistics and discovered he was good at it and enjoyed it. Then he went to France in 2019 as part of Wright State’s Ambassador Program.

“It was an incredible experience,” said Siefert, who has always enjoyed learning about different languages and cultures. “We spent one week in Nice and two in Paris. After returning to the U.S. I decided to change my French minor to a second major.”

Siefert said Wright State has prepared him to succeed by giving him the knowledge and experiences that will help him for the rest of his life.

“I would especially like to highlight the French department,” he said. “All of the French professors are unbelievably kind, caring and knowledgeable. I have learned so much more than just French with them.” 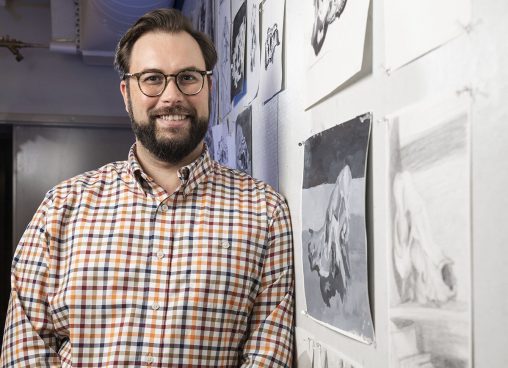 Charles Wright will graduate with a bachelor’s degree in art with an emphasis in painting.

Charles Wright will receive his bachelor’s degree in art with an emphasis in painting.

Wright worked professionally as an in-house corporate graphic designer focusing on school and planning products. He currently has clients who rely on him for marketing, video and design. In addition, he teaches design as an adjunct faculty member in the Visual Communications Department at Sinclair Community College.

Wright said his time at Wright State helped him dive more deeply into art and influence his design work in a way he hadn’t predicted.

“Art and design are different, but have many connections,” he said. “Taking this time to focus on art and art history has given me a stronger background in a subject that influences my career field.”

Wright plans to use his degree to continue to make art and pursue teaching.

“The department does a great job at giving students the tools to continue to create artwork on their own after college,” he said. “My time here has also influenced my teaching. It’s been great to be in the classroom and see how other creative people teach.”