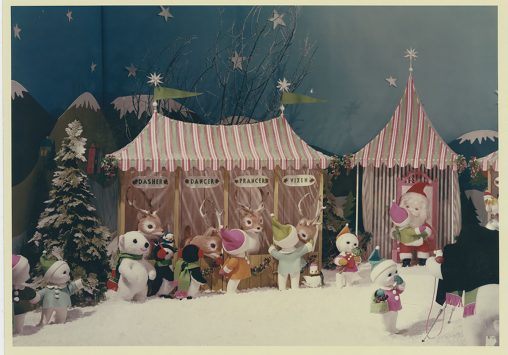 Rike’s donated photos of its department store holiday window displays to the Wright State Special Collections and Archives in 1988.

Historic photos of Rike’s department store holiday window displays in downtown Dayton are nestled in their beds at the Special Collections and Archives in the Wright State University Libraries.

The treasures range from a photo of the Tike’s Gift Shoppe, a window display of stuffed-animal dogs celebrating around a Christmas tree and an iconic black-and-white photo of street crowds watching Santa arrive on the roof of the store.

Rike’s donated the photos to the Special Collections and Archives in 1988.

The collection not only consists of photographs of Rike’s holiday displays but also information about company executives and even a newsletter column written by late humorist Erma Bombeck, who worked at Rike’s.

“So many people have fond memories of going with their parents or their grandparents to see the displays,” said Jane Wildermuth, head of Special Collections and Archives. “It’s very nostalgic, remembering downtown Dayton when it was in its glory. I think that’s the value. So people can come back and see all of these great materials here in the archives.”

The “Rike’s Winterland Wonderland Windows” display, now shown each December at the Wintergarden in the Schuster Center, first appeared in the windows of the NCR offices in New York City in 1943.

The display was such a hit in New York that in 1945 Frederick Rike, owner of the Rike-Kumler store that later became Rike’s, negotiated and was given permission to erect the Christmas display in the windows of his store in Dayton.

It soon became the focal point of Christmas in downtown Dayton, and families would bring their children down each December to enjoy the presentation with dancing elves and starring Santa Claus.

When the complex that housed Rike’s was eventually razed in November 1999 many of the little figures of the display were placed in storage in an empty store. Eventually, some of the badly deteriorated figures were purchased by Downtown Dayton Partnership, donated and restored.