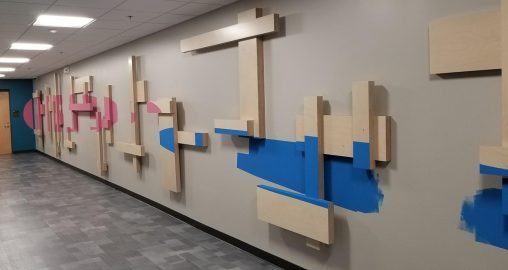 Landon Crowell, fine arts technician in the Wright State Department of Art and Art History, created an unusual optical illusion-like wall sculpture now on display in a hallway connecting Kettering Labs and Hathcock Hall at the University of Dayton.

Colorful wooden block-like forms with floating discs that seem to dance in and out of focus now adorn a hallway at the University of Dayton.

About 18 months ago, the University of Dayton put out a regional call for proposals to install artwork in a campus structure connecting Kettering Labs and Hathcock Hall, a computer science building. It was also a national call in which any University of Dayton student, faculty member or alumni from anywhere in the country could submit proposals.

Crowell was awarded one of the commissions and selected a large space in the 120-foot-long basement hallway of the connector building.

It took him three months to fabricate the wood elements and a total of nearly three weeks to complete the installation.

The sculpture is comprised of 22 wood elements consisting of two to four pieces per element. The elements range in dimension from two-by-two-foot to six-by-eight-foot pieces. The forms are attached to the wall and run the entire length of the hallway.

Anamorphic objects are distorted projections that appear normal, or in focus, when viewed from a particular spot. 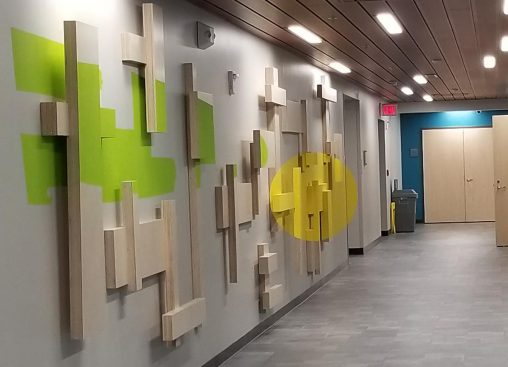 Landon Crowell’s sculpture is comprised of 22 wood elements consisting of two to four pieces per element.

The anamorphic installation is similar to one Crowell created in 2018 at the PNC Arts Annex in downtown Dayton. The aerial sculpture there is a constellation of aluminum pipes with painted areas that come together to create a floating colored disc.

Crowell is an accomplished sculptor. The Contemporary Dayton, one of the region’s leading contemporary gallery spaces and artists’ organizations, has called him one of eight promising Dayton artists to watch. He has also exhibited at the Rosewood Arts Centre in Kettering, among other arts venues in the area.

As a fine arts technician at Wright State, Crowell is often called on to install artworks in the Robert and Elaine Stein Galleries in the Creative Arts Center. He also helped install “Dial,” by Erwin Reddel, the sculpture in the Neuroscience Engineering Collaboration Building that is designed to mimic the firing of the brain’s neurons by creating complex, shifting patterns of light and shadow.