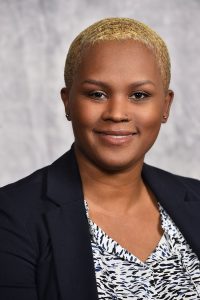 After earning a bachelor’s degree in liberal studies from Wright State, Elisheba Hawkins is now pursuing a Master of Public Administration.

A heavy summer rainstorm was the last straw. It overwhelmed the stormwater system in the southwestern Ohio village of Silverton, causing widespread flooding in streets, yards and homes.

For Wright State University Master of Public Administration student Elisheba Hawkins and Village Manager Tom Carroll, it was a call to action.

They wrote an article urging local governments across the nation to address climate change by upgrading infrastructures, decarbonizing communities and solving sustainability issues.

The article was published in the magazine of the International City/County Management Association, a Washington, D.C.-based organization of professional city and county managers and other local government employees.

Hawkins, a Seasongood Research Fellow, and Carroll, a member of the U.S. Environmental Protection Agency’s Small Communities Advisory Subcommittee, said 50-year storms are now happening every other year and the stormwater pipes in their Cincinnati-area village are simply too small to handle the large volume of water. They said heavy flooding is happening in many other communities too because infrastructure built decades ago can no longer keep up.

“Climate change — really better described as climate catastrophe — will have tremendous and growing implications for local government managers going forward,” they wrote. “World and national leaders have not done enough to stop this catastrophe even though the evidence has been mounting for more than a generation.”

Silverton’s infrastructure improvement plans in 2022 call for adding oversized storm pipes under the curb line in flooding areas to create additional stormwater storage under the street.

Carroll and Hawkins also said every vehicle purchase needs to be examined to find workable lower carbon or electric alternatives.

“The automotive industry has a lot of work to do to accelerate electrification, but local governments can spur demand by insisting on green fleet options,” they wrote. “Do not just buy a new gas-powered police cruiser. Buy a hybrid or even consider a Tesla for patrol cars. Staff cars can be 100-percent electric. … As you build new buildings or replace systems in existing facilities, invest in energy efficiency. Put solar panels on public building rooftops.”

In 2018, Silverton devised an energy plan that addressed the need for 100% renewable energy sources, enabling homeowners and renters alike to benefit from lower energy bills and helping to reduce the village’s carbon footprint.

“Graduate students just entering city management today will spend the rest of their careers facing climate catastrophe challenges and grappling with racial and social equity,” Carroll and Hawkins concluded. “How will the graduate students of today who will be tomorrow’s city managers remember us? Did we shift our organizations and communities in the 2020s or did we ignore science and the Weather Channel and continue to buy gasoline and diesel?”

Hawkins grew up in Cincinnati, graduating from Gilbert A. Dater High School in 2004. After earning her bachelor’s degree in liberal studies from Wright State in 2021, she returned to pursue her Master of Public Administration.

“As a Wright State alum, the choice to return for my graduate degree was easy,” she said. “During my undergrad years at Wright State, I enjoyed the classes, professors, campus and cost to attend Wright State.”

Hawkins said she has always been interested in how policies are formed and implemented. She said she initially considered a career in social work but quickly realized the most effective changes can come in the form of public policies.

“She is diligent, thoughtful and very smart,” said Warshawsky. “But, most importantly, she wants to make a difference in the world through her public service. With her experience in local government and broader world view, she is destined for a fantastic career in public administration.”

Hawkins said the internship requirement in Wright State’s MPA Program has enabled her to leverage her skills practically and has been the biggest contributing factor to her preparedness.

Hawkins, who began interning in Silverton in August, said time management has been the biggest challenge as she works on several projects for the village.

“There has been a learning curve as I navigate how to create new programs, and this coupled with in class work has made me more aware of my time constraints and time management skills,” she said. “The most gratifying part of the internship has been being able to make connections between my coursework and the functions of a local government.”

Following graduation, Hawkins plans to work in local government with a focus on either economic development or diversity and inclusion.