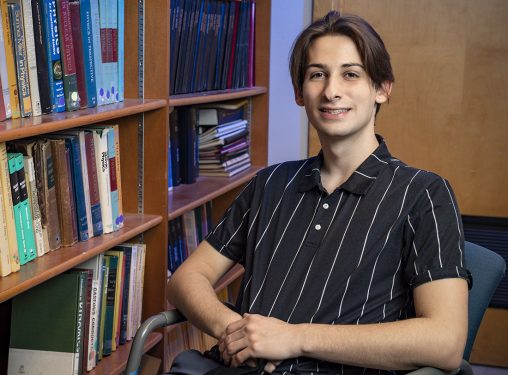 The Air Force Research Laboratory recognized Neil Pohl, a physics major at Wright State, for his work by naming him Intern of the Week.

It’s a win-win. Wright State University physics major Neil Pohl gets to be involved in some fascinating projects for the Air Force and the Air Force gets Neil Pohl.

The 19-year-old Pohl interns at the Air Force Research Laboratory (AFRL). In fact, Pohl was named the AFRL Intern of the Week last summer.

Located at Wright-Patterson Air Force Base, AFRL is a scientific research organization dedicated to the discovery and development of aerospace warfighting technologies. It controls the Air Force’s science and technology research budget.

“AFRL is really proud that we can have students like Neil join the AFRL scientists and engineers doing the important work they’re doing to make sure that our warfighters have the technological advantage on the battlefield,” said AFRL spokesman Bryan Ripple. “We value our partnerships with the universities such as Wright State. The students such as Neil are just outstanding ambassadors.”

Pohl is working on several projects at AFRL. One is investigating the gas density and geometric evolution after nanosecond discharges.

“We’re looking at how efficient these pulses are compared to normal spark plugs for aircraft,” said Pohl.

A second project involves modeling the emissions spectra of diatomic nitrogen in which Pohl built a graphical user interface (GUI) that once approved would be free for AFRL scientists and engineers, enabling them to avoid the expense of using commercial counterparts.

“The GUI is in a pretty good state right now,” said Pohl. “I can put in an infinite number of files. It can switch between the files. I can calibrate the spectrometer. I can generate a simulated spectrum that allows the user to measure the gas temperature from their experimental data. It works. It’s going well right now.”

Pohl grew up in Troy, Ohio. His father’s side of the family is heavy into STEM careers that include engineering and botany.

As a student at Miami East High School, Pohl was able to participate in science fairs. He became interested in physics his sophomore year, peppering his teacher with questions.

“I really was interested in what he was teaching,” he said. “It made me want to go into chemistry or physics.”

During high school, Pohl took classes at Wright State and following graduation enrolled at the university to study physics. Wright State was also attractive to Pohl because he had been working for AFRL through the Wright Scholars program.

His project at the time involved thermionic emission, the release of electrons from metal by applying heat.

“I was working on a device that could track the sun to heat up a piece of metal,” he said. “I got it up to 1700 degrees Fahrenheit.”

Pohl, who is mentored by Steven Adams, Ph.D., faculty associate in physics, said he likes the fact that Wright State’s Department of Physics in the College of Science and Mathematics is a close, tight-knit group.

“And the instrumentation class is a lovely course,” he said. “Dr. Ajani Luister Walden Ross does a very good job of making sure you are getting cool projects, making sure we have equipment. It’s a lot of fun. There is a lot of care that goes into it.”