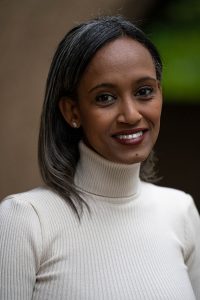 When she was just a young girl, Rishan Habte and her family fled the violence in Eritrea, settling in the United States as refugees. Today, Habte, who received a bachelor’s degree in English from Wright State University, is an advocate for refugees at a major resettlement agency in Washington, D.C.

Habte said the most challenging part of the job is taking her emotions out of the picture and being able to deliver.

“LIRS was very involved in the recent emergency evacuation in Afghanistan,” she said. “My colleagues and I worked long hours for weeks to be of assistance to new arrivals. There were many days when I had to step away from my computer to compose myself before my emotions took over.”

Habte said the most gratifying part of her job is knowing that her organization is helping so many people resettle in a safe place and giving them the same opportunities she had to contribute to society.

When Habte and her family came to the United States as refugees, they were fleeing violence in their home country of Eritrea as the northeast African nation struggled for independence.

In 1995, the year Habte’s sister graduated from Wright State, the Dayton Peace Accords were signed at Wright-Patterson Air Force Base, ending the Bosnian War and bringing peace to Bosnia and Herzegovina. The international armed conflict, which occurred between 1992 and 1995, claimed the lives of an estimated 220,000 people and produced 2 million refugees.

“It was one of the first times in recent decades that the refugee crisis was presented on an international platform, and I felt a connection to it not only because of my experience as a refugee but because the peace resolution happened so close,” Habte said. “This would serve as the framework for my career as an advocate for refugees.”

Habte first became interested in attending Wright State when she was only 10 after she and her parents dropped her oldest sister off to start college. By the time Habte had entered high school, she had visited Wright State’s campus more than a dozen times.

“Perhaps it was the sleek, aerodynamic architecture of the buildings, or maybe the intricacy of the underground tunnel system or even the magnitude of the Nutter Center during a Wright State graduation ceremony,” she said.

Habte enrolled at Wright State in 1999 after graduating from Walnut Ridge High School in Columbus with advanced credits in AP English.

She said the highlight of her time at Wright State was gaining access to prominent leaders when they came to speak at the university.

“I sat in the audience of Nobel laureates, authors, civil rights icons, presidential nominees, diplomats, entertainers, historians, journalists, archivists, inventors and innovators,” she said. “And I had the honor of walking in the hallowed halls dedicated to pioneers of flight.”

Habte said at Wright State she received individualized attention in a nurturing environment. Her small classes enabled her to bond with her professors, some of whom she is still in contact with like Alpana Sharma, Ph.D., professor and chair of the Department of English Language and Literatures.

“In many ways, Wright State was a microcosm of the world, and I was given world-class access that prepared me for a national platform,” Habte said.

Sharma said Habte was a dedicated student who took to the kinds of postcolonial texts from South Asia, Africa, the Caribbean and Latin America that Sharma was teaching.

“Her experience as an immigrant and a refugee gave her a special window through which to respond empathetically to the concepts of decolonization, displacement, exile and identity in the literature we read,” said Sharma. “I can’t think of a better person to serve as an advocate for refugees at a major resettlement agency.”

After the 9/11 terrorist attacks, Habte left Wright State as a junior and moved to Los Angeles to try to get a grasp on what she saw as uncertain times. But she returned to Wright State in 2004.

“I decided that if I wanted to keep up with the changing world, I needed to re-enroll in college,” she said.

At the time, the United States was engaged in wars in Iraq and Afghanistan. Many of Habte’s classmates were active-duty soldiers stationed at Wright-Patterson Air Force Base and one of her instructors, Liam Anderson, Ph.D., professor of political science, had written a book about his time in the Green Zone in Baghdad.

“Being at Wright State gave me an insider’s look into two major conflicts that would change the political landscape of the Middle East,” she said. “I believe this helped prepare me for the work I was destined to do.”

Habte graduated from Wright State in 2006 with a bachelor’s degree in English and a minor in international studies with a focus on the Middle East and North Africa.

Following graduation, she worked for a nonprofit organization that aids new immigrants in Columbus. In 2011, she relocated to Washington, D.C., where she worked as an English as a second language instructor at Prince George’s Community College and Montgomery College and later as an administrator for the Literacy Council of Montgomery County, Maryland.

Habte is also a member of the State of Maryland’s Skilled Immigrant Taskforce, which assists newly arrived immigrants with foreign training and credentials to navigate the U.S. workforce system. In addition, she is the editor of Maryland TESOL Quarterly, which supports the organization’s goal of advancing the teaching of English to speakers of other languages.