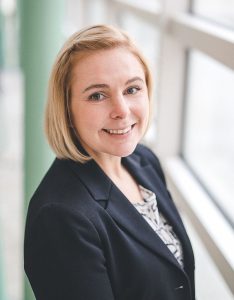 Beth Graves, who earned bachelor’s and master’s degrees from the Raj Soin College of Business, is president of Prime Controls

The creative aspect of marketing drew her to the field and led her to successful marketing stints at three different companies. And that journey steeled the Wright State University business alumna for a top executive post.

Today, Beth Graves, who earned bachelor’s and master’s degrees from the Wright State Raj Soin College of Business, is president of Prime Controls, a Kettering-based manufacturing company founded by her father when Graves was 13.

The company designs and manufactures inspection equipment for the can-making industry as well as the automotive and other metal-forming industries.

“Every can in the world has passed between a pair of our sensors,” she said. “We can find a hole in a can that is many times smaller than the diameter of a human hair over 1,000 times per minute.”

When she joined Prime Controls in 2011, Graves worked in marketing, defining the company’s brand and introducing things like branded apparel and trade show demos. She redesigned the company’s logo, its ads and website. She also took the company’s entire product portfolio, which was just a list of parts numbers, and created systems to help customers better understand how and what to buy.

Graves later took over inside sales, where she met with customers and eventually ran both sales and marketing. A few years later, her father retired and Graves took over running the company.

“The most challenging thing is really overcoming my own worries,” she said. “I have been working on this for a while, working really hard to improve myself personally and spiritually and trying to learn that the bad comes with the good. The most gratifying thing is building this company with a good group of people. It’s fun to see us achieve our goals.”

Graves grew up in Kettering, spending some of her childhood cheering for the Kettering Wee Wildcats.

“We lived in a nice little neighborhood that allowed me to ride my bike wherever and whenever I wanted, play in the creeks near our house and spend time with a bunch of neighborhood kids,” she said.

Her parents were leaders in the community. Her father served as president of the Optimist Club and her mother was director of the church choir who later opened her own gift shop in Waynesville.

After graduating from Waynesville High School in 1997, Graves attended Milligan College in Tennessee but later transferred to Wright State, attracted by the opportunity to work while going to school and live off campus.

“I loved the come-and-go aspect,” she said. “I could stay late studying. The computer labs were always open. Or I could work from home in an apartment off campus.”

Graves said she was attracted to marketing because of its creative aspect.

“I can say without question that Wright State was the place in which I learned my potential,” she said. “I really did love my time at Wright State. I had great experiences with all the professors. I am a natural learner, so I loved all the classes.”

Graves said she initially struggled with an entry-level statistics course, withdrawing from the class multiple times before finding the determination to master it.

“By the end of my statistics classes, I was acing all the exams,” she said. “It wasn’t about the statistics but about the journey. I needed to experience to understand that I really was a smart person and I could do this.”

Thomas Traynor, Ph.D., dean of the Raj Soin College of Business, said he is proud that the college was instrumental to Graves’ development, both as a highly successful professional and as a well-rounded, self-confident person.

“She could have attended many other colleges and ultimately chose Wright State and excelled because of our excellent degree programs and supportive faculty and staff,” he said.

Graves then joined a startup called Clearwire, a Seattle-based company specializing in internet providers, satellite systems and cable. It was one of the best experiences of her career.

“It was like drinking from a fire hose every day and I loved every minute of it,” she said. “I got to learn from people from very large companies like T-Mobile and Sprint. Many of them are now working for Google and Amazon.”

A few years later, Graves’ brother passed away unexpectedly, devastating the family and causing Graves to change her priorities.

“For me, family was number one and I needed my life to reflect that,” she said.

She later accepted her father’s offer to join Prime Controls.

Graves is pursuing a doctorate in strategic leadership at Regent University and is working on her final project. She hopes the degree will help her develop coursework that will enable leaders to understand how connected they all are.

“I’m very interested in quantum leadership and how our energy affects the energy of others,” she said. “My goal is to help create organizations worthy of human beings and human beings worthy of organizations. That balance is an important factor to me personally and it’s deeply rooted in personal responsibility.”

When Graves isn’t trying to keep up with her three active children, she enjoys meditation, yoga, cycling and log cabins with Jacuzzis. “And I just recently discovered that I really like classical music,” she said.