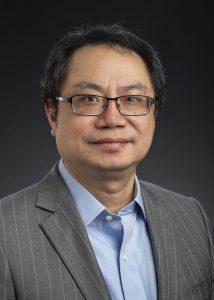 Zhiqiang Wu, Ph.D., professor of electrical engineering, received the 2021–2022 Brage Golding Distinguished Professor of Research Award for his extensive research, publishing 76 journal articles, including 25 published in the past three years.

He has also received extensive funding from nationally competitive sponsors and has worked as the lead investigator for multiple projects that span numerous other universities.

Wu’s research, which focuses on artificial intelligence, communication, signal processing, electronic warfare and big data, has been funded by the National Science Foundation, the Air Force Research Laboratory, the Office of Naval Research, the Ohio Federal Research Network, the Department of Energy and NASA. Wu has received over $3.5 million in funding.

Wu has published 76 journal articles, 49 Institute of Electrical and Electronics Engineers transactions and journal papers, 139 conference papers, one book and six book chapters. His research has been cited nearly 4,000 times, with 1,630 of those citations coming within the past five years. He has also served as a keynote speaker and offered tutoring at Institute of Electrical and Electronics Engineers events.

Wu’s colleagues praise his work as highly impactful and innovative.

After Vasu Chakravarthy, Ph.D., an Air Force Research Laboratory Fellow, met Wu on a plane while en route to an Institute of Electrical and Electronics Engineers conference, Chakravarthy immediately asked Wu to be his academic advisor for his Ph.D. work.

“Wu is a gifted researcher who has command in both theoretical and applied research,” Chakravarthy said. “He is a dedicated and caring teacher who instills passion for learning in his students.”

Michael Nowak, division technical advisor and branch chief of the Air Force Research Laboratory, has worked with Wu for over seven years. He said that Wu has developed software that combines hardware, software-defined radios, and numerical simulations into one framework, which was vital to a combined research project.

“Wu’s research and development work has made significant impact on the research community,” Nowak said. “He has garnered respect around the globe as an eminent researcher.”

Wu has also received several awards from the College of Engineering and Computer Science, such as the Early Achievement Award, two Excellence in Research Awards and the Outstanding Faculty Award.

“Wu exemplifies the entrepreneurial, innovative and scholarly characteristics deserving of recognition,” said Brian Rigling, Ph.D., former dean of the College of Engineering and Computer Science. “Wu is a model for research excellence at Wright State University.”