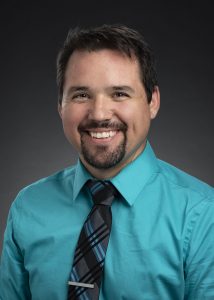 Craig Baudendistel, Ph.D., lecturer of mechanical and materials engineering, received the 2021–2022 Presidential Award for Outstanding Non-Tenure Eligible (NTE) Faculty: Teaching for having a positive impact on his Wright State students and high school students who are considering attending the university.

Since joining the Department of Mechanical and Materials Engineering in 2014, Baudendistel has become widely recognized as one of the best teachers within the department and is a popular choice as an advisor for capstone design projects. Baudendistel has developed several new courses that have enabled Wright State students to obtain certificates recognized by the engineering industry, such as computer-aided design and computer-aided manufacturing.

In the past year, Baudendistel developed a new course focusing on current best practices in Solidworks. He also reworked a course to focus on the new principles. The courses encourage hands-on learning that enables them to produce tangible products by the end of the course. He brings CAD/CAM experience to the classroom as a mechanical design consultant with a Dayton-area company that manufactures custom drones for use in aerial package delivery. Drone Express is in the process of obtaining certification with the FAA.

“Baudendistel puts his whole heart into his work,” said Brian Rigling, Ph.D., the former dean of the College of Engineering and Computer Science. “His love for teaching is clearly evidenced by the impact on his students.”

Baudendistel has also published the second edition of a textbook that is popular both in college and high school.

Along with his work with current Wright State students, Baudendistel has worked to expand Wright State’s influence in local high schools through programs like College Credit Plus and Project Lead the Way, which enables faculty to facilitate and co-teach classes.

Raghavan Srinivasan, Ph.D., professor and chair of the Department of Mechanical and Materials Engineering, said that Baudendistel’s contributions to both Wright State and local schools are invaluable.

“Baudendistel’s performance in teaching has been at the highest level expected,” Srinivasan said. “He has gone above and beyond expectations through his service and scholarship activities.”

Recently, Baudendistel assisted in advising a Wright State Solar Splash competition team in creating a solar-powered boat. Solar Splash is the world championship of collegiate solar boating. Baudendistel successfully secured funding for his team by garnering grants from organizations such as the Society of Automotive Engineers and the Ohio Space Grant Consortium. The team placed third in an endurance event and placed fifth overall.