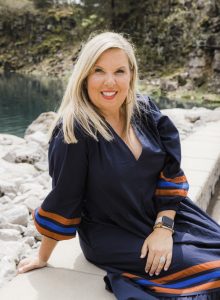 This breast cancer survivor is helping others in their own fight with the disease.

It began when Heather Salazar met a 23-year-old woman named Alexis who was battling Stage IV breast cancer and looking for a home for her baby. Salazar and her husband would not only adopt her child, Lexi, but would also look after Alexis for the next year and a half before she passed away.

Then Salazar was diagnosed with breast cancer as well.

“I was scared, mad, frustrated, and overwhelmed,” she said. “It was early stage but aggressive. I went to treatment and thankfully survived.”

During treatment, she grew close with Stefanie Spielman, who, along with her husband, Chris—an Ohio State standout linebacker and former NFL player and broadcaster—raised millions of dollars for research for breast cancer. Spielman’s breast cancer was much further along than Salazar’s.

A month before Spielman passed away, she told Salazar, “Heather, don’t use my death as an excuse. You know what you were supposed to do.” They had made a promise that Spielman would be active on the research side and Salazar on the care side.

As president and CEO of Dayton-based peer support organization Pink Ribbon Girls and inspired by Spielman, Salazar, who earned her bachelor’s degree in psychology from Wright State in 2004, applied for a grant—and local philanthropists Thom and Pat Robinson took a chance. Pink Ribbon Girls received $45,000 in 2012.

The organization was then able to supply three meals a week for an entire family dealing with breast cancer. “We also take care of a lightweight vacuum so they can vacuum after surgery, cleaning supplies, rides to treatment, and peer support,” Salazar said.

And how it’s grown since that funding.

Pink Ribbon Girls served 660,000 meals and provided 50,000 rides to treatment last year alone. Even the pandemic couldn’t slow them down.

“Thousands of people in peer support shifted to virtual, allowing us to grow on a national level,” she said. “We actually found a way to help more people.” Now operating in Dayton, Cincinnati, Columbus, San Francisco, and St. Louis, the goal is to expand Pink Ribbon Girls to all states within five years.

With around 30 employees, Salazar must be prepared to improvise frequently, which she’s used to from her Wright State days as a nontraditional student. In those years, she would sometimes show up with more than her books. “There were times when I had to bring my kids to class and the professors were amazing and empathetic and encouraged me all the way to graduating,” she recalled.

It can be difficult to see so many people dealing with the disease, some of whom won’t make it, but Salazar says the day it doesn’t affect her is the day to leave her position.

“I know how hard it is to be your own advocate and to be in control of your treatment plan, all while trying to maybe raise a family,” she said. “We’re there to make things a little easier. More than anything, we’re saying, ‘You’re not alone.’” 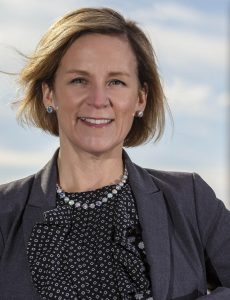 As an intern at the National Aviation Hall of Fame, Amy Spowart ’01 found herself with an unusual experience for such a position—hanging around with the likes of American heroes Neil Armstrong and John Glenn.

“It was my very first enshrinement in 1999,” said Spowart, who earned her bachelor’s degrees in history and classical and ancient studies from Wright State. Today she is president and CEO of the Hall of Fame, located on the grounds of Wright-Patterson Air Force Base near campus. “It’s a big event that happens once a year where the people who have been chosen for induction get in to the Hall of Fame.”

“I was incredulous that someone from a small town in central Pennsylvania would ever be around such important people,” she said. “I still can’t believe my luck. I work very hard to have the trust of the brilliant people in our industry and it takes many years to develop these kinds of relationships in any industry.”

While going to Wright State, back when the Hall of Fame was getting ready to build its permanent exhibit site at its 17,000-square-foot learning space, she researched in the role of historian and began writing the narratives for its permanent display.

While raising her children, Spowart worked sporadically for the Hall of Fame and eventually became the executive director in 2015, after being asked multiple times before accepting the position.

“I’m a little Type A, and when I accepted, I just went with it,” she said. “I put processes in. Rewrote all the manuals. Updated all the systems. I really wanted to make sure from the ground up we had a nonprofit that had a strategic vision. It actually took three or four years to get it to that phase.”

In 2019, she was elevated to president and CEO. During COVID, she was a part of one of the hall’s biggest achievements—developing the Discovering Flight with the National Aviation Hall of Fame program for elementary school students.

“It’s an exciting multi-tiered program, which has digital media, professional development, and real-time support for teachers,” she said. “Governor DeWine loved it so much that he just gave us $2 million to get it in every elementary school in Ohio. My goal is to get it in every state.”

Celebrating the Hall of Fame’s 60th anniversary this year, the learning center portion of the hall alone hosts more than 250,000 visitors annually, many of them schoolchildren. It also hosts events, including The Wings of Women, which takes place on Girls in Aviation Day.

Spowart credits her studies at Wright State as being critical to her success. “The classics department was huge when it came to my development. It changed my world and it centered and focused me in fostering an appreciation of primary sources. I couldn’t have succeeded in this role without this background,” she said.

“As an example, I’ve had the job of capturing oral histories of Hall of Fame members. It’s Wright State that helped give me the ability and confidence to do a project like that right…I feel like the hall and Wright State have been great fits—and it’s led to a great career.”