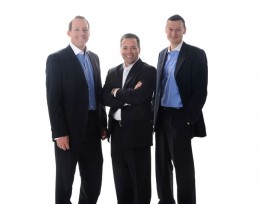 Anthony Schock, Travis King and Brian Rathbun, work together at UBS Financial Services as the Wealth Consulting Group. Each are graduates of the Raj Soin College of Business.

Thirteen years ago, they joined forces as professionals.

But they were already linked by their love for alma mater.

A trio of financial aficionados, Anthony Schock, Travis King and Brian Rathbun, work together at UBS Financial Services as the Wealth Consulting Group.

Each expert is a graduate of the Raj Soin College of Business at Wright State University.

“It was an opportunity to leverage our skills and we thought it made sense to pay it forward to the university,” said Schock.

Soon, from that seed of common interest an idea grew: Teach a retirement seminar at Wright State, with the proceeds benefiting the university.

It’s been over a decade since they began the adult education seminars on campus. The course has helped all kinds of students learn more about planning for retirement, what Schock calls “the ultimate vacation.”

“It’s win-win all the way around because people get the financial help, Wright State gets the money, and we get the introductions as well,” said King.

The rest, as they say, is history.

For the 11thconsecutive year, the trio will impart financial planning wisdom to another group of eager students, beginning the first week in March, in the aptly named seminar, Financial Strategies for Successful Retirement.

Students learn about wealth accumulation, wealth preservation and wealth transfer, but most of all they learn how to take control of their own finances.

“We wanted to create a class where people weren’t going to be sold something, but they would have books, be in a classroom format, and they would leave with a financial plan in the end,” said Rathbun.

Students sign up in units, often husbands and wives, and pay $69 for four different 2.5-hour seminars, taught on consecutive weeks at Wright State, and a fifth private session with one of the three advisers.

“I can almost guarantee they’re going to come away with something, some bit of information, whether it’s with tax, estate planning, whatever, that will save them money,” said Rathbun.

Saving the family nest egg has fueled a recent interest led by a bounty of baby boomers hitting the retirement pipeline.

“Demographically speaking, more people are getting to that age and they’re thinking about that. The hard times in the economy have seemed to have awoken people too,” said Rathbun.

Most of the students have degrees, says King, and work for an employer that has a retirement plan. Many, he says, also own small to mid-size businesses.

“We have participants for all levels of awareness,” said King.

It’s 20-year-olds on campus who benefit from the money raised by the seminars.

The trio says the seminar has raised about $25,000 over the years for Wright State. After nominal expenses are paid, virtually all of the fees have gone back to the university.

At first the money supported the Dr. Daniel J. Kaufman Memorial Scholarship fund, named after a finance professor the trio had at the Raj Soin College of Business.

This year the money will be donated to the Student Philanthropy Council. The student group encourages philanthropy among students and strives to educate students on the importance of giving back.

To register for Financial Strategies for Successful Retirement, call Event Services at Wright State University at (937) 775-5512 or visit http://www.wright.edu/admin/confevents/c_services.html