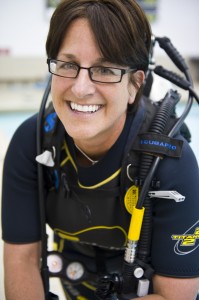 Wright State SCUBA instructor Gina Bier will be inducted into the Women Divers Hall of Fame in March.

When she was a child, Gina Bier couldn’t decide whether she wanted to be a scuba diver or police officer. So she became both.

Over the past 25 years, the Wright State University adjunct professor has scuba-trained about 1,800 students, faculty and staff. As a detective for the Kettering Police Department, she has done underwater searches in criminal investigations, including the high-profile Erica Baker case.

For her contributions to the profession, Bier has won induction into the Women Divers Hall of Fame.

“Stuff like that is hard to put into words,” Bier said of the honor. “I started diving at Wright State, and I fell in love with it. It’s like the ultimate reward for 25 years of work. I was truly surprised.”

Bier will be inducted into the hall of fame at the Beneath the Sea conference in Secaucus, N.J., on March 26. The 10 new inductees include Celine Cousteau, granddaughter of Jacques Cousteau, a French explorer, filmmaker and researcher who studied the sea and all forms of life in the water.

“To be able to stand up there with her is a phenomenal honor,” Bier said.

Bier caught scuba fever from her father, who began diving in the 1950s as a hobby and later worked as a diver for police agencies.

Bier took her first scuba class at Wright State in 1986, when she was a student. After she obtained her bachelor’s degree in anthropology in 1987, she stayed on in Wright State’s scuba program as a volunteer and later became an instructor.

Scuba training is conducted in the swimming pool at the Student Union. It typically takes 10 to 12 weeks to students to obtain their scuba certification.

Bier said she gets the most satisfaction out of seeing those students who never thought they would be able to win certification.

“It really does boost student self-confidence,” she said.

As a detective and diver for the Kettering Police Department, Bier worked the highly publicized case of Erica Baker, who was 9 when she disappeared in 1999 while walking her dog. She has never been found.

Bier conducted numerous dives in area lakes and ponds in search of Erica.

“I get in the water, and I know I’m looking for a child,” she said. “That is a mentally tough challenge.”