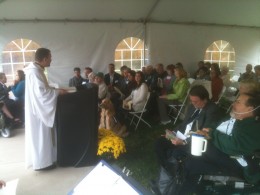 The memorial service for Samatha Laux was held at the service-dog park she and her family helped create.

More than 60 people and five service dogs gathered at the Wingerd Service Dog Park on campus to remember friend and fellow accessibility and service-dog advocate Samantha Laux, who died in June.

“Samantha was a very free-spirited girl, but very stubborn and she did not let her disability get in her way,” said friend and Wright State student Megan Goettemoeller. “She was fearless, a big time jokester and a bookworm. Her legacy at Wright State is the service-dog park and the growing service-dog training program here.”

Wright State University’s dog park, believed to be the only college park built specifically for service dogs, was decorated with cobalt blue ribbons the week of her death and was the site for Laux’s memorial. 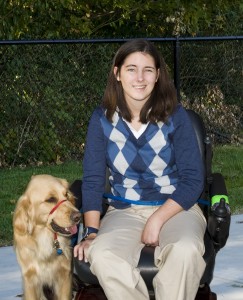 Laux and her family provided the support to build the park, which opened in 2008.

At the Oct. 19 memorial it was announced that Samantha would receive a posthumous degree, a B.S. in psychology. The scholarship in her name, an endowment, has also grown with donations to over $30,000 and this semester is helping its first recipient attend Wright State.

“Samantha is a model of the student with a disability who is strong and directed,” said Jeffrey Vernooy, director of Wright State’s Office of Disability Services. “Working with Samantha to support her on this campus helped us to come to a new level of service for students.”

Laux majored in psychology, had a 3.155 grade point average, participated in a study-abroad program in Switzerland and was a downhill skier. Her disability had progressed to the point where she had to leave the university two years ago.

Sarah Twill, Ph.D., associate professor of social work, worked with Laux during the program in Switzerland.

“I think I speak for all members of the class when I say that Sam changed our lives,” Twill said. “She taught us how to value each moment, try new things, use laughter and humor to make friends, and the true meaning of courage.”