Raiderthon dance marathon is story of the year 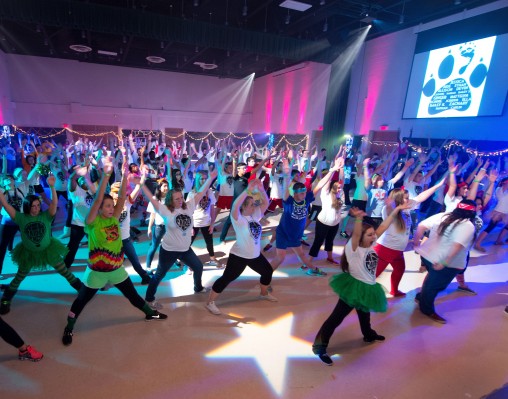 A Zumba routine had everybody throwing their hands in the air at Raiderthon.

Great things are certainly on the horizon for Wright State University in the new year, but 2013 was a great year to be a Raider too. We begin 2014 with a tip of the hat to the best feel-good story of 2013.

The Wright State Newsroom team has selected coverage of Raiderthon, where more than 600 Wright State students, staff and faculty danced over 15 hours to raise funds for Dayton Children’s Hospital, as the No. 1 story. An astonishing total of $50,389 was raised.

“Raiderthon made miracles happen here at Dayton Children’s Hospital,” said Casey Slater, dance marathon coordinator. “Not only will the money raised help purchase life-saving medical equipment, but each of Raiderthon’s miracle kids were treated like rock stars at the event. Wright State has some amazingly caring people.” 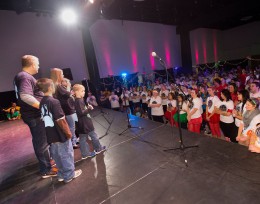 Raiderthon made the miracle kids and their families feel like rock stars.

“At Wright State we talk a lot about community engagement but those are just words that are written in our mission statement,” said Sukhmanjit Singh, Student Government president. “Rachel (Fagan, vice-president of student government) and I wanted to show that we as students, can best serve our community and create not just a better Wright State but a better college experience. This event was not just about raising $50,000, it was also about showing the potential to do something truly great.”

Several families benefiting from the fundraiser and their miracle children were also in attendance. Among those in the crowd were David Bowman, whose 9-year-old daughter has beaten cancer thanks to Dayton Children’s and whose 7-year-old son is being treated there for a neurological disorder.

“We were cheering like heck for the Wright State students and expressing our gratitude,” Bowman said. “These were college students who are sensitive and aware enough that they’re giving back and doing something that is really amazing and impactful and meaningful. It’s just off-the-charts impressive.”

“I was so amazed by the generosity of our students and everyone involved with this great cause.  I am so proud to call myself a Raider, and even more proud of our students who are willing to carry on this tradition,” said Fagan. “Raiderthon is by far one of the best experiences I have had at Wright State, and will be an event that I will continue to attend as an alum.”

Raiderthon wasn’t the only story that gave Wright State bragging rights. Commencement coverage, a national title for Rowdy and a thrilling basketball buzzer-beater were among the most viewed stories this year. Here are the Top Ten most-viewed newsroom stories from 2013:

1. Wright State packed the house for an academic rock star

4. Wright State lost a stalwart for equal treatment and a dear friend

6.  Focused on fitness, this student is going places

9. A buzzer-beater for the ages lifted the Raiders to the Horizon League title game

10. Wright State broke ground on what promises to be a place for groundbreaking collaboration