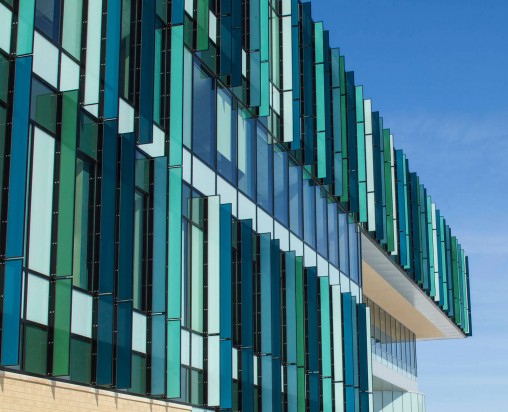 The Neuroscience Engineering Collaboration Building’s facade is clad with hundreds of glass “fins” that provide shading and reduce heat buildup on sunny days. Home to Wright State’s top neuroscientists, engineers and clinicians, the building will open later this month.

Chilled ceiling beams. An anti-vibration floor. A dust-free sensors lab free of the tiniest speck. A glass facade striped with colorful, energy-saving fins. And a dazzling art installation with 3-D asterisks that mimic the firing of the brain’s neurons.

These are among the architectural features of Wright State University’s spectacular new Neuroscience Engineering Collaboration (NEC) Building, which promises to spawn pioneering research and medical breakthroughs by housing the collective brainpower of top neuroscientists, engineers and clinicians.

“It is one impressive building,” said Robert Fyffe, Ph.D., vice president for research and dean of the Graduate School. “The science and engineering rock stars who are going to be doing research there are not going to be sitting alone in their labs. They’re going to be in a stimulating interactive environment.”

The four-story, L-shaped structure features two wings — one for neuroscience and one for engineering — that flank a central, multi-story atrium.

The structure is honeycombed with laboratories, features a special bullpen for graduate and undergraduate student researchers and includes offices, conference rooms and a 105-seat auditorium for research symposiums. 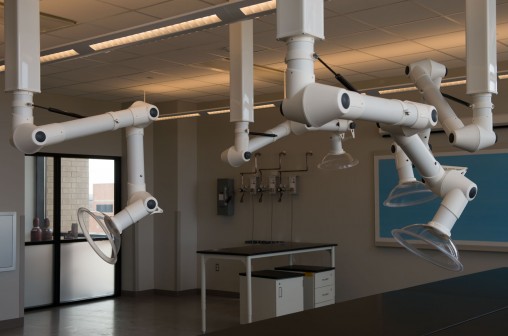 The NEC Building will foster research in treating brain, spinal cord and nerve disorders by putting researchers and clinicians under the same roof and creating an environment that enables them to collaborate.

The lead design and production architect on the project is Perkins+Will, a global firm that utilized expertise from its Chicago and Houston offices.

“We couldn’t have made a better choice; their expertise was off the charts,” said Wright State University Architect Robert Thompson, who launched the project three years ago. “For architects to be able to talk science and equipment at a level very comparable to what the researchers are used to — I was just beyond impressed. It was fantastic because it built a level of trust with the researchers. They knew they would get the best space they could get.”

Jerry Johnson, design principal in the Perkins+Will Chicago office, said the organization and adjacencies of programs in the building will strongly enhance communication and interaction between the scientists, engineers, researchers and students.

“The office spaces, conference rooms, atrium and graduate bullpen are designed with the intention of drawing people into them,” said Johnson. “These spaces are at the heart of the building and are celebrated in the design.”

Thompson said that even though Perkins+Will has done far larger projects, the firm aggressively sought to be selected by Wright State to design the NEC Building, which was recently featured in Laboratory Design magazine.

“They said ‘this is the future for science in higher ed and we want to be in on it,’” Thompson said.

Researchers working to understand the biological processes that underlie the nervous system and its disorders, clinical researchers pursuing advancements in treatments and cures, and engineers creating medical devices and imaging technologies will operate alongside one another to hopefully break new ground in health care and defense.

“Every researcher coming into the building has been handpicked by the departments based on their expertise, their funding and willingness to collaborate and step outside of their labs,” Thompson said.

The NEC Building is honeycombed with laboratories and offices, as well as conference rooms and a 105-seat auditorium for research symposiums.

“The building is special in a lot of ways,” said Thompson.

Open teaming areas give researchers space to interact and share knowledge. Movable, height-adjustable workbenches allow for easy reconfiguration of the labs as research projects develop and change. Electricity, gas, suction and data are all delivered from the ceilings through quick-connect plugs, which also eases reconfiguration.

“Active chilled beams” in the ceilings supply heat and cooling without the conventional air handlers that pump massive amounts of air through a building. The newer technology uses a thermostat to control a mix of hot and chilled water in the pipes. When air flows over the pipes, it creates a natural convection current.

“It is a much more energy efficient means of conditioning the space in the building,” Thompson said.

The use of lasers and powerful microscopes required a laboratory space that minimized building vibration, which can affect image clarity. So an innovative floor system called a “void slab” was installed on one floor. To offset the massive weight that would have been created by the vibration-reducing 21-inch-thick concrete, it was embedded with large, plastic air-filled forms that allowed longer clear spans, column-free laboratories and a more solid floor structure.

“So we still have the mass we need to keep the vibration down, but we have these plastic bubbles to keep the weight of the slab down,” Thompson said.

To limit dust and contaminants, which can choke sensitive sensors and electronics, a “cleanroom” was created. A bank of HEPA (high-efficiency particulate arrestance) filters remove 99.97 percent of particles of a certain size from the outside air, which is then discharged and not recirculated.

Elliott Brown, Ph.D., the Ohio Research Scholars Endowed Chair in Sensors Physics at Wright State, said the anti-vibration and cleanroom technology will also make use of the building extremely attractive to outside companies, providing a revenue source for the university.

“This building is amazing,” said Brown. “It’s going to make us nationally competitive in microelectronics and nanoelectronics.”

Special safety curtains and air-cushioned tables are among features in the optics and laser lab. And the micro-manufacturing area has 3-D printers that could be used to produce equipment developed from research in the building.

“I get excited because I think of the things that could potentially happen as a result of this building,” said Thompson. “We can image the brain, analyze it, figure out and maybe even custom-make surgical tools on the fly with 3-D printing.”

About 70 percent of the facade is glass, enabling natural light to stream into the building and create an airy work environment. The facade is clad with hundreds of glass “fins” that provide shading and reduce heat buildup on sunny days.

The architects came up with the design after producing a heat map from extensive solar studies that plotted the path of the sun over the building. The fins are of varying thicknesses and colors to take into account the heat gain on a particular spot of the building. 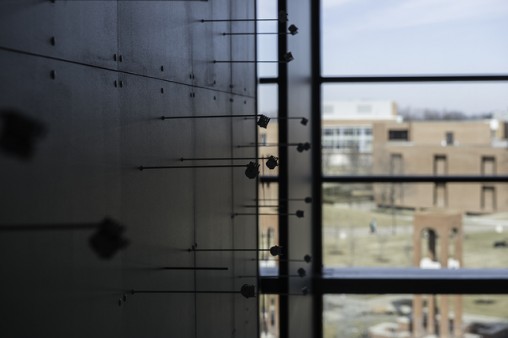 The NEC Building’s atrium will feature an art installation with 3-D asterisks that mimic the firing of the brain’s neurons, designed to inspire the scientists, engineers and clinicians in the building.

The art installation in the atrium mimicking the firing of the brain’s neurons is designed to inspire the scientists, engineers and clinicians. Ninety dials arranged in a diamond grid produce complex, perpetually shifting patterns of light and shadow. It was created by Erwin Redl, an Austrian-born artist from Bowling Green, Ohio.

The $37.5 million building construction project is within budget, on time and comes at a relative low cost per square foot when compared to similar buildings. Messer Construction of Dayton and its subcontract construction crews soldiered on for two years, even in the bitter cold. Thompson recalled seeing gloveless workers tying wires around reinforced steel rebar when it was zero degrees outside.

“The work that goes on in this building will truly be cutting edge, maybe even science fiction in its nature,” said Fyffe. “I would like to see what we do here translate out into the real world.” 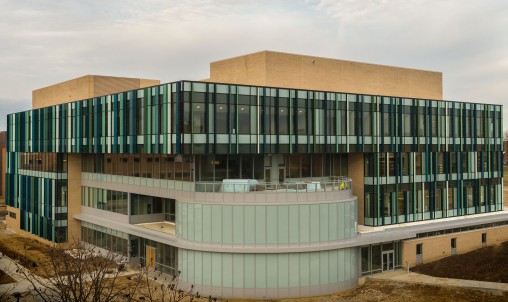 Wright State will celebrate the opening on the NEC Building with a ceremony April 16 from 4 to 6 p.m.