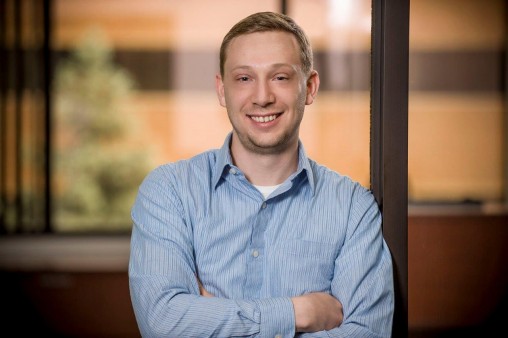 Wright State graduate Josh Deaton credits the College of Engineering and Computer Science’s innovative Model for Engineering Mathematics for helping him earn a bachelor’s degree and a Ph.D. in engineering. Today, Deaton operates his own company, Adjoint Technologies, in Beavercreek. (Photo by Chris Snyder)

The son of an auto mechanic in rural western Ohio, he once built a miniature hovercraft in high school and dreamed of becoming an engineer. But the traditional college curriculum that bombards incoming students with calculus before they ever see an engineering course was a dealbreaker.

However, today Josh Deaton is a Ph.D. engineer with his own company thanks to a revolutionary engineering curriculum at Wright State University that is quickly spreading across the country.

“A traditional curriculum would have been too much for me, just blasting myself with math without any of the creativity of engineering that I really liked,” said Deaton. “Had it not been for Wright State’s innovative curriculum, I very likely would have switched my major to business.”

The Wright State Model for Engineering Mathematics Education is not only spreading to other universities, it is also being embraced in the high schools.

For example, it is being used at Bellbrook High School, New Albany High School, Carroll High School and the Dayton Regional STEM School — and will soon be adopted by Dayton Public Schools and others.

“It’s the next big thing in high school opportunity,” said Nathan Klingbeil, dean of Wright State’s College of Engineering and Computer Science. “This changes the way we prepare kids to be engineers and fills the pipeline to corporate America with talented and diverse workers enthusiastic about their jobs. It will likely become a national model.” 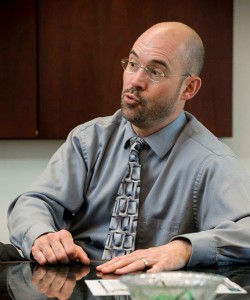 College of Engineering and Computer Science Dean Nathan Klingbeil introduced the engineering mathematics curriculum to “uncork” the calculus bottleneck and double the number of students who get their degrees. (Photo by Chris Snyder)

While all of the traditional calculus courses are still required, the early back-to-back sequencing of calculus that so often derails students was replaced in 2004 with a more just-in-time, flexible structure. Klingbeil says “uncorking” the calculus bottleneck can enable universities to double the number of students who get their degrees.

Now running under semester course number EGR 1010, the Wright State course teaches the students how math is really used in engineering. In addition, it gives them a taste of engineering courses such as circuits and design that in the past they wouldn’t have been able to take until later in their college careers.

Since the new curriculum was put in place in 2004, the engineering graduation rates of incoming students who took the course jumped to 56 percent, compared to only 24 percent for students who did not take the course.

The course enrolls more than 500 engineering students per year and is growing. The engineering college is now the largest academic unit on campus, with total enrollment expected to exceed 3,500 students this fall.

In the past two years, Klingbeil has crisscrossed the nation, giving dozens of presentations on the curriculum. Currently, more than three dozen institutions around the country, including The Ohio State University, are using aspects of the model.

The Wright State course has been running at Bellbrook High since 2009. It has recently been aligned with the school’s capstone requirements for Project Lead the Way, a pre-college engineering curriculum being used in about 200 elementary, middle and high schools in Ohio and 4,000 around the country. Enrollment in Bellbrook’s implementation of EGR 1010 has swelled to 28 students.

“What we’re trying to do is address real engineering in the high schools by teaching design, solving problems, using modern tools and making students understand why the math matters and how it connects to all of the rest of the stuff you do,” said Klingbeil.

“I’ve met plenty of engineers who may not be super math whizzes, but when it comes to design or thinking outside the box and getting the problem solved — which is what engineering is all about — they are top students,” he said.

Baudendistel teaches the course at Bellbrook High in the fall and the Dayton Regional STEM School in the spring. It is the same class with the same content that is taught at Wright State, and the students get college credit at the university for taking it.

Baudendistel lectures at the schools for about an hour three times a week, and the students come to Wright State for the lab portion of the class. The students face a heavy workload that features long exams, written and computer-programming homework and hands-on laboratory experiments.

“If you want to prepare for a career in engineering, this is where you ought to start,” said Baudendistel.

“The ultimate goal is not just to get you out of high school, but to prepare you to get out of college; and this course fits right in line with that,” said David Lawrence, chief of school innovation. “Without a doubt, we’ll be able to pop the cork on the STEM fields if we can really get this as part of the foundation of what we do in Dayton Public Schools.”

Klingbeil hopes to effect a widespread high school implementation of the EGR 1010 course as part of College Credit Plus, which enables students to earn high school and college credits at the same time by taking courses from community colleges or universities. This will be facilitated through WSU’s innovative “co-teach” model, where the university-level curriculum is made available in online format and controlled by a WSU faculty member, who provides mentorship to the high school teacher charged with co-teaching the course.

The online version of the EGR 1010 course is slated to go live this fall, including virtual implementation of both lecture and laboratory materials, with the potential for expansion to every high school in Ohio.

Baudendistel will be available to help the high school teachers teach the curriculum and to maintain the consistency of homework and exams.

“We’re certain that universities will see the value of adopting the curriculum in order to better recruit top, direct-from-high-school students,” Klingbeil said. 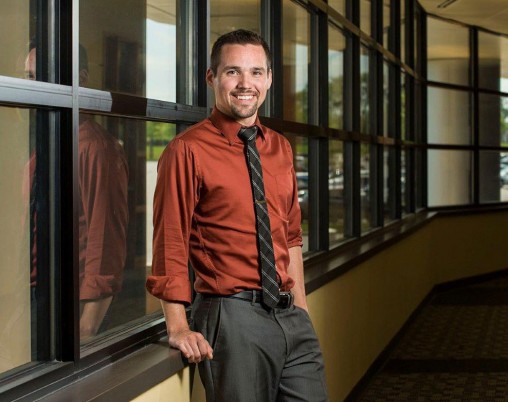 The course is also slated to be implemented at Central State University and Wilberforce University as part of the National Science Foundation’s Ohio LSAMP Alliance for increasing minority student participation in STEM.

Mitch Heaton, director of development and academic liaison at Wright State’s engineering college, said companies like Boeing, Exxon-Mobil and Emerson Climate Technologies are interested in the curriculum because it will produce young, talented, more diverse engineers to replace engineers who are reaching retirement age.

“You don’t want the same-old, same-old every time you go to design a new product,” Heaton said. “You need somebody who has a different viewpoint.”

“There is absolutely no way I would be doing what I’m doing now without going through a nontraditional engineering curriculum like the one at Wright State,” he said. “I’m indebted to the program because of where it’s gotten me.”