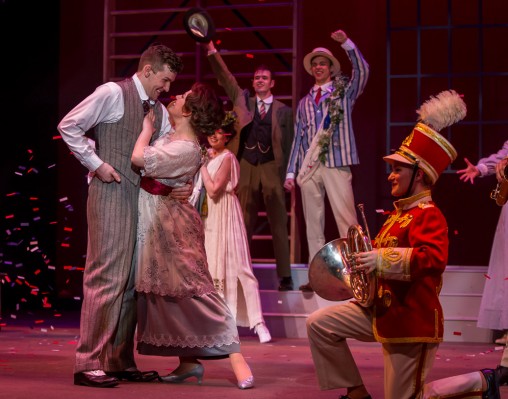 Wright State Theatre’s production of “The Music Man” opens Thursday, March 17, and runs through April 3 in the Festival Playhouse in the Creative Arts Center. (Photos by Erin Pence)

Wright State University Theatre continues its 41st season in the Festival Playhouse with the classic musical “The Music Man,” which opens Thursday, March 17, and runs through April 3.

“The Music Man,” by Meredith Willson and Franklin Lacey, became a hit on Broadway, in 1957, winning five Tony Awards, including Best Musical. The cast album won the first Grammy Award for Best Musical Theater Album. The show originally ran for 1,375 performances on Broadway and its popularity inspired several revivals, including a long-running 2000 Broadway revival, and a film adaptation in 1962.

The musical features well-known songs like “Trouble,” “Seventy-Six Trombones,” “Goodnight, My Someone,” “Lida Rose” and “Till There Was You.”

The production’s director, Marya Spring Cordes, assistant professor in acting and musical theatre at Wright State, said “The Music Man” is a story about hope.

“Hope that things can change for the betterment of the people of any town at any time. Hope that status quo can be shaken up and that something wonderful can come out of it — a coming together for a cause — the hope for something greater. And, in this case, proving once and for all that the power of making music together is the true, universal language,” said Cordes, who previously directed “Pride and Prejudice” and “Grand Hotel” at Wright State.

Set in Iowa in 1912, “The Music Man” tells the story of con man Harold Hill, who poses as a boys’ band leader and sells band instruments and uniforms to naive townsfolk, promising to train the members of the new band. Although Harold is not a musician and plans to skip town without giving any music lessons, librarian and piano teacher Marian falls in love with him after he helps her younger brother overcome his lisp and social awkwardness.

For tickets and theatre information call the Creative Arts Center Box Office at 937-775-2500, or purchase single tickets online at wright.edu/theatre-tickets.