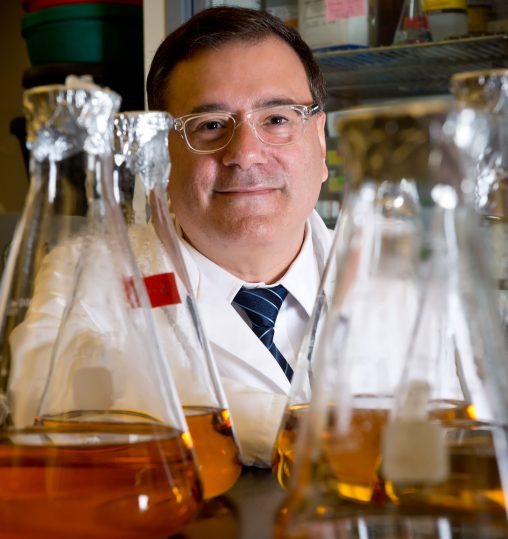 Acclaimed Wright State University scientist Julian Gomez-Cambronero will be honored in his native Spain for contributions to science.

A biochemistry and molecular biology professor and Brage Golding Distinguished Professor Award recipient, Cambronero will receive the prestigious Communications Award conferred by Cadena SER at a June 22 ceremony for contributing to the dissemination of science and the wonders of nature, his successful scientific career and for enhancing the name of Ciudad Real, a city of 75,000 in the famed La Mancha region of Spain.

“Going back to La Mancha to receive this award has a special meaning to me,” he said. “It’s where I was born and I have great memories of the places and the people.”

Cambronero grew up in Manzanares, a municipality in Ciudad Real. He was recognized by Manzanares in 2014 for scientific achievement as well as having created a large model of the solar system in a local park.

“This Communications Award means a lot to me as it recognizes not only my work in the laboratory as a scientist, but also one as an educator and communicator,” he said. “I have shared in my writings the passion and awe for the wonderful world of nature and the scientific discoveries with the general public and especially with children. They themselves are ‘scientists’ as they always ask the nagging question ‘why?’ and then, ‘but why’ after a first answer is insufficient. All of this is at the core of what we as professional scientists do every day in trying to understand the inner workings of nature.”

Recent achievements of Cambronero’s research laboratory are expected to be detailed during the ceremony.

Cambronero recently returned to Wright State following a six-month visiting professorship at Harvard University as part of a $1.5 million National Institutes of Health grant in which he is principal investigator.

The visiting professorship enabled Cambronero to tap into world-class expertise (with Harvard researchers Charles Serhan and Gregory Stahl) as well as models and equipment at Harvard to investigate a technique used in ischemia/reperfusion injury, in which tissue is damaged when blood supply returns to it after a lack of oxygen, and the role of inflammation.

Cambronero and his team also recently discovered a key protein that plays a critical role in the development of breast cancer tumors and the spread of the disease to the nearby lungs.