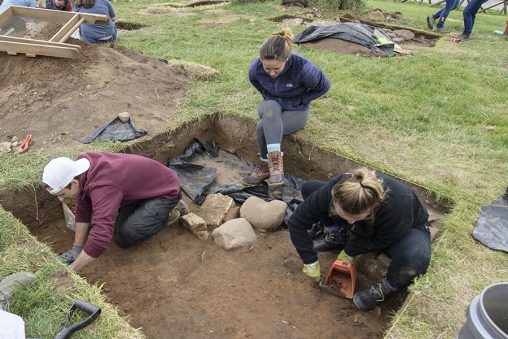 Wright State University students are digging up history in George Rogers Clark Park to piece together what happened at the Battle of Piqua.

The students are enrolled in field school, a six-week archaeological dig that has focused on the Clark County historical site for the last two years. Led by Professor Lance Greene, students are looking for artifacts from the Shawnee village that once lived on the land and the battle that happened between the Native Americans and settlers during the Revolutionary War in 1780.

“This was a really important site in not only Native American history and Ohio history but in American history,” Greene said. “…There are some accounts of what happened during the battle, but we don’t know a lot about the details of it.”

Students spent multiple weeks collecting artifacts at the park. Now they’ll work in the lab to clean and package them and see what can be learned from each item.

“Musket balls, gun parts, things like that,” Greene said. “We want to reconstruct what happened on the battle.”

The study of the artifacts will determine in more detail how many people were involved in the battle, what kinds of weapons they used and the specific location where the battle occurred.

Read the entire story at springfieldnewssun.com