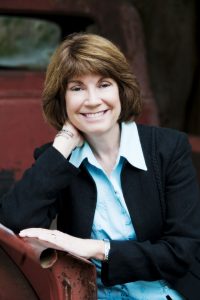 Ann Weisgarber is a 1976 Wright State graduate and award-winning author.

The symposium, which is presented by the student organization Public History Professionals, takes place from 9 a.m. to 4 p.m. in the Discovery Room of the Student Union.

The symposium is free and open to the public. Registration is not required.

Along with Weisgarber, several students and graduates of Wright State’s Public History Program will present at the symposium.

View the complete schedule for the Public History Symposium.

Weisgarber, a 1976 Wright State graduate, is the author of three novels of historical fiction. Her first novel, “The Personal History of Rachel DuPree,” received the Stephen Turner Award for First Fiction and the Langum Prize for American Historical Fiction. The film rights for the novel have been optioned by Viola Davis’s JuVee Productions. Production on the film is scheduled to begin in late spring 2018.

For her keynote address, Weisgarber will discuss how she has utilized the resources of archives across the country for research and inspiration.

“All three of my books have been research based,” said Weisgarber. “Almost every chapter is the result of discovering something in an archive. I can write an entire scene around the tiniest thing I found in an archive. Something in a display will just hit me that just triggers a whole chapter in a book.”

Weisgarber and her husband Rob, who is also a Wright State graduate, are among the first donors to support Discover Your Story: The Campaign for the Wright State University Archives Center.

The $6.5 million fundraising campaign will transform the former corporate headquarters of the Wright-Patt Credit Union at 2455 Presidential Drive into the new home of Special Collections and Archives. The Archives Center would almost triple the space for the university’s world-renowned collections — from 12,000 square feet scattered across two buildings to nearly 30,000 square feet in one central location.

“It doesn’t shine (on campus) the way it could shine,” Weisgarber said. “It will be in its own stand-alone building, which makes it so less intimidating for people to come in.”

Weisgarber lives in Galveston, Texas, and is the author of “The Promise,” “The Personal History of Rachel DuPree” and the forthcoming “The Glovemaker. “The Promise” was shortlisted for the Walter Scott Prize for Historical Fiction, the Western Writers of America Spur Award and the Ohioana Book Award.

She earned a Bachelor of Arts in social work from Wright State University and was the 2016 Alumna of the Year. She graduated from the University of Houston with a Master of Arts in sociology. She serves on the council for the Texas Institute of Letters and is at work on her next novel.