An intensive, three-day brainstorming exercise at Wright State University boosted the confidence of students, who came up with potential solutions to real-world problems in the handling of battlefield injuries and mass-casualty situations.

The first-ever Innovation Weekend — hosted by the College of Science and Mathematics (CoSM) — attracted about 35 students from four different colleges to the Student Success Center in April.

Douglas Leaman, dean of the college and lead organizer, called it a huge success that was made possible by the involvement of regional companies, military and nonprofit organizations.

“I saw students who weren’t science or engineering majors tackling this problem and coming up with great solutions. I think they surprised even themselves,” Leaman said. “If I had to point to one thing, I would say it provided confidence to students who didn’t know they had it in them, and will hopefully inspire them to tackle additional problems and get more involved with experiential opportunities.”

The challenge posed to the students was how to improve the medical monitoring and documentation of patients from the point of injury through all of the transport points until arrival at the final hospital destination. After nearly 48 hours of work, six teams of students presented solutions to an outside panel of experts. 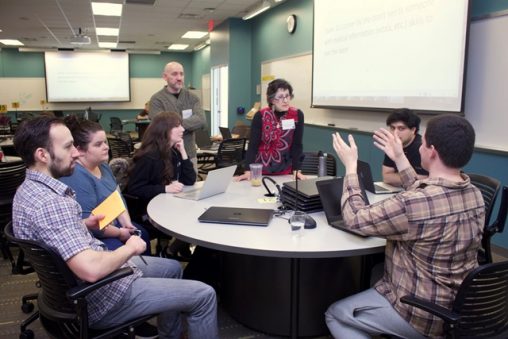 Hosted by the College of Science and Mathematics, Innovation Weekend brought students from four colleges together to devise potential solutions to real-world problems in the handling of battlefield injuries and mass-casualty situations.

“The presentations were excellent. They were really, really good,” said Leaman. “Every single judge commented that all of the presentations exceeded their expectations. The solutions ranged from practical, near-term possibilities to ideas that 20 years down the road may finally see the light of day.”

Innovation Weekend was designed based on a “hackathon” approach to problem-solving that is becoming increasingly common in the private sector. The goal was to encourage and enhance an entrepreneurial and innovative mindset in undergraduate students across diverse majors. It was also designed to foster closer ties with the private sector and expose students to experiences of regional workforce relevance.

“When I go out and meet with our public and private partners, they talk about the need for interdisciplinary solutions,” said Leaman. “They want to talk about innovative ideas to solve problems — not incremental progress but big leaps. Events like this can bring out concepts that are big leaps.”

The students — who came from CoSM, the College of Engineering and Computer Science, the College of Education and Human Services and the College of Nursing and Health — were first given the background of the problem, titled “Rapid Visualization of Patient Data.”

When soldiers are wounded or injured on the battlefield, their transport can come during a life-or-death situation and involve multiple steps — from the battlefield to a triage center to a helicopter to secondary medical unit to a transport plane to a hospital in a different country to a U.S. Veterans Affairs hospital. At each step along the way, the medical information about the patient must be handed off and logged so that the physicians who ultimately treat the patient have the best information.

The current system of paper documentation is inefficient at best. Patient information can be incomplete, difficult to read or be lost altogether. Other challenges include the lack of common standards for documenting or handing off a patient, limited time and personnel, the stresses of flight, limited equipment and medication, noise, low light, confined spaces and fatigue.

Similar challenges apply in natural disasters, active shootings or other mass-casualty situations in the United States.

“You’ve got patients going in all different directions, and the caregivers on the far end may not be getting the information they need to give the patient the best care,” said Leaman. “It’s really much worse than just efficiency; it can be life or death in some cases.”

The students were presented with the challenge and then went through a “speed-dating” process in which they formed their own problem-solving teams. The next morning, each group presented their initial ideas, and then the teams were reformulated based on which of those ideas the individual students wanted to work on.

“In doing so, the doctors at the destination are potentially seeing and diagnosing the patients before they even arrive,” said Leaman. 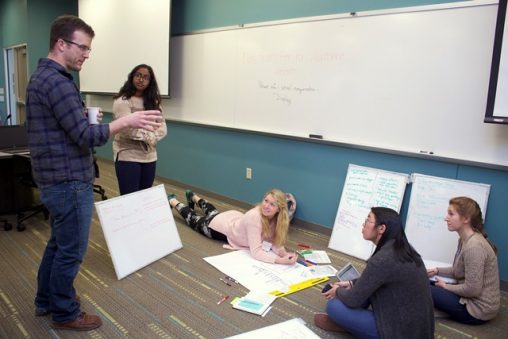 Innovation Weekend was designed based on a “hackathon” approach that encouraged an entrepreneurial and innovative mindset in undergraduate students across diverse majors.

One proposal suggested implanting the bodies of soldiers with sensors that detect and transmit information about blood pressure and other vital signs.

“I felt it was incredibly innovative and forward-looking,” said Leaman, who added that at least two members of that team were freshmen. “It’s ideas like that that don’t make it onto the scene in the next two years but could happen somewhere down the road. I can’t help but think the technology will catch up to the idea.”

The three-day exercise was privately funded, as all future Innovation Weekend events will be. There are plans for four more of these CoSM hackathons at Wright State next year, two in the fall and two in the spring.

“This is a concept, an idea, an approach that really speaks to our public and private-sector colleagues,” said Leaman. “It’s really easy for me to sell this.”

Leaman hopes future Innovation Weekends will attract even more students and inspire them to get involved in research and internships.

“The biggest win for me would be if this encourages students to get more actively involved in their degree programs,” he said. “The first couple years of many degree programs involves students sitting in a classroom, learning and not doing. This is doing.”