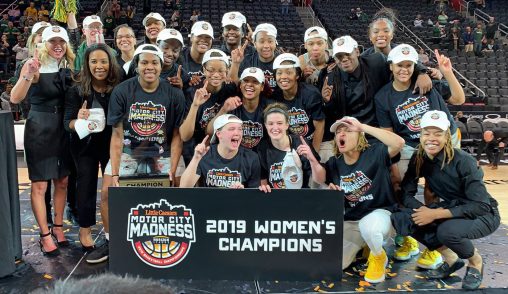 The Raiders, who earned the top seed in the tournament by winning the league’s regular season title, clinched the program’s second trip to the NCAA tournament.

The Raiders improved to 27–6, setting a program record for most wins in a season.

Emily Vogelpohl led all players with 14 points while pulling in five rebounds. Michal Miller tallied 13 points, eight of which came in the first half. Symone Simmons corralled 14 rebounds and added eight points, six of which came from behind the arc. Tyler Frierson came up with 13 rebounds and converted 4–4 from the foul line. 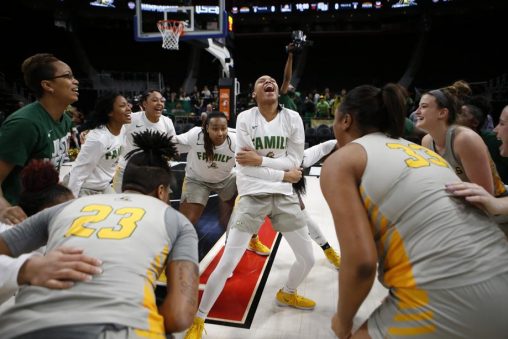 1st Quarter
Quick in transition, the Raiders were the first on the scoreboard with a Tyler Frierson jumper. Two possessions later Green Bay’s Frankie Wurtz went to the line and converted both shots to tie the game. Over the next possessions, the Raiders and the Phoenix traded three-pointer to make the score 5-5. The Phoenix grabbed their first lead of the game at the 5:57 mark from the foul line. Heading into the media timeout, the Phoenix had only made one shot from the field and the Raiders had only made two with the score standing at 6-5 in favor of Green Bay. Green Bay continued their run against a cold-shooting Wright State team and extended their lead to 11-5 with a three-pointer and a two. Michal Miller broke the run with a mid-range jumper just outside the paint. Dialing up an isolation for Miller, Miller was fouled on the play and converted both of her shots, pulling the score to 11-9 with the Phoenix still holding their lead.

2nd Quarter
To start the quarter the Raiders scored a three-pointer from Symone Simmons to grab back the lead. Teneshia Dixon joined in on the scoring, extending the Raiders’ run to nine straight points. After a shooting foul, Dixon added one point from the free throw line to make the score 15-11. Emily Vogelpohl got on the board for the Raiders with a layup and Angel Baker added two more to put the Raiders up by eight. Still held scoreless in the quarter, the Green Bay bench called a timeout as their 11-5 lead disappeared. Green Bay hit a three-pointer at the 3:28 mark to end the Raiders’ 15-point run. Adding two more points, Green Bay got back within five points, but Tyler Frierson added two points from the line to keep the Phoenix at bay. With under a minute in the half, the Raiders missed a three but got the ball back to reset the shot clock. With a fresh timer, Angel Baker milked the clock before making a jumper to put the Raiders up by nine. With 0.8 left on the clock, the Tyler Frierson hit two free throws to give the Raiders a double-digit lead for the first time in the game.

3rd Quarter
Green Bay opened the second half with a layup by Madison Wolf to pull back within single digits. After forcing a steal and drawing a foul, Mackenzie Taylor added two points from the foul line. A three-point from Green Bay’s Meghan Pinghel put the score at 29-23. With two more points from Madison Wolf, Green Bay pulled to within four points of the Raiders. Two points from Mackenzie Taylor and then two points from Symone Simmons after moving quickly in transition pushed the Raiders’ lead back to eight. Before the media timeout, Green Bay added two points from Carly Mohns. Over the next two minutes the Phoenix went on a six-point run and pulled to within two, but Emily Vogelpohl ended the Raiders’ drought with two points. With a three-pointer the Phoenix grabbed the lead, but Vogelpohl answered with a long-distance jumper to end the quarter.

4th Quarter
There would be two lead changes in the first minute of the quarter with each team swapping jumpers. Simmons hit her second three-pointer of the day to make the score 42-38. Vogelpohl hit a huge three-pointer as the shot clock expired to put the Raiders up 47-38. After a 10-0 run for Wright State, the Green Bay bench called a timeout with 6:42 remaining in the game. After two foul shots and a jumper, Green Bay cut Wright State’s lead to five. Hitting a shot high off the glass, Taylor kept the Raiders in front by more than two possessions. Four points for the Phoenix put the score at 49-47 in favor of the Raiders. Strong rebounding by Frierson gave the Raiders the chance to milk time off the clock as they held possession for almost 90 seconds although they wouldn’t be able to score over that time. With 1:28 on the clock, Green Bay tied the game at 49-49 thanks to two points from Laken James. With just over a minute remaining, Vogelpohl hit a long two from the top of the key to grab back the lead. Frierson showed up clutch in the paint as she forced a powerful block against Carly Mohns, which gave the Raiders the ball back. With 25 seconds left the Phoenix began to foul the Raiders in an attempt to regain possession. From the line Vogelpohl converted two shots to put the Raiders up by four points with 22 seconds remaining. From the top of the key, Green Bay’s Laken James hit a three-pointer to pull within one point of the Raiders. With 17 seconds left in the game, Miller added one point from the line after being fouled. Looking to take the lead, the Phoenix’s Carly Mohns attempted a three-pointer, but it fell into the hands of a waiting Vogelpohl. Vogelpohl added one point from the line to make the score 55-52. With suffocating transition defense, the Raiders prevented the Phoenix from getting shot off at the end of the game.