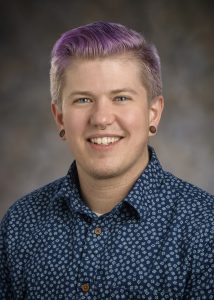 Petey Peterson, director of LGBTQA affairs, received the 2018 President’s Award for Excellence in Human Relations in recognition of their efforts to implement LGBTQ-friendly policies and programs that encourage inclusivity and openness in the Wright State community.

As soon as Peterson joined the Office of Lesbian, Gay, Bisexual, Transgender, Queer and Ally Affairs in 2015, they began to make a positive impact. Peterson created an advisory board to study the history of university LGBTQA groups and on-going efforts to promote an inclusive environment. Since then, Peterson has implemented several programs to encourage inclusion and acceptance for students who identify as LGBTQA+.

Patricia Schiml, senior lecturer of psychology, commends Peterson for their work on inclusivity on campus.

“As soon as they arrived on campus, they began making an impact,” Schiml said. “I cannot think of a better human to honor than Peterson.”

Peterson has started several new programs, such as the Chosen Family Feast, which allows students to celebrate the holidays with others who are affirming and accepting of their identities. They have also increased and expanded existing programs, including staffing in the Community Engagement Room; the Safe Space Program, which teaches students and employees how to be social justice allies; the Our Voices Panel Program, which allows LGBTQ-identified individuals to share their experiences; and Lavender Graduation, which honors LGBTQ seniors and leaders.

Peterson has also worked with Residence Life and Housing to incorporate the option of gender-inclusive housing, as well as creating name-change and pronoun options for transgender students. They also created mechanisms to facilitate conversations about preferred names and pronouns between students, faculty and staff. In addition, Peterson was part of an effort to increase the number of all-gender restrooms at Wright State.

Matt Boaz, former chief diversity officer, praised Peterson for their tireless work to improve conditions for people with disabilities by advocating for captioning during meetings and public events.

“I believe they have given a voice to the voiceless,” Boaz said.

Gary Dickstein, interim vice president for student affairs, said he has heard from students who have told him that Peterson is the reason they came to Wright State, as well as many students who have stayed at the university because of Peterson’s impact.