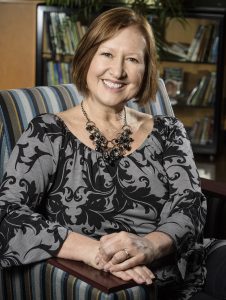 Kirsten Halling, professor of French, received the Robert J. Kegerreis Distinguished Professor of Teaching Award for her dedication to her students and colleagues.

Halling, who teaches French in the Department of Modern Languages, has been instrumental in the program’s growth. In 2000, Wright State had one French major. Today, 42 students major in French and 59 students minor in the language.

She is a favorite professor among her students, who say she is an effective teacher who cares that her students are truly learning the French language. Halling goes out of her way for her students to ensure they always get the best possible education.

Halling’s motto is “L’anglais n’est pas necessaire,” which translates to “English is not necessary.” She teaches this from the first entry-level French class and encourages students to use French whenever they can in their daily lives.

Throughout her teaching career, Halling has received several awards, including the 2016 Dorothy S. Ludwig Excellence in Teaching Award from the American Association of Teachers of French, the 2014 Wright State University International Education Award, the 2010 Ed Allen Outstanding Foreign Language Instructor Award and Les Palmes Academiques, or the Academic Palms, from the French government, which distinguishes academic figures in the world of culture and education.

In 2008, the Ohio Foreign Languages Association recognized Halling’s teaching when it named the Wright State French Program the Outstanding Foreign Language Program in the state. In 2014, Halling was the representative to the Ohio Department of Higher Education French Transfer Assurance Guide Panel and was named panel leader.

Linda Caron, dean of the College of Liberal Arts, said Halling’s passion for teaching and her students reaches far beyond Wright State.

“Her students are vociferous in their praise of her teaching and in acknowledging the importance of her high standards,” Caron said. “Halling is a role model of teaching effectiveness in her department and college.”