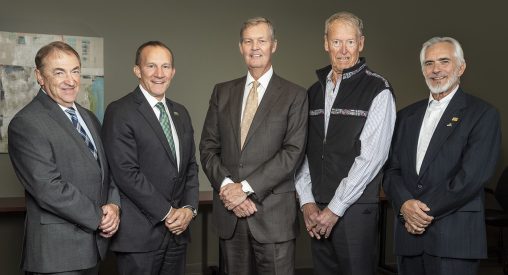 “We really wanted people who had shown engagement throughout their time here on the board,” said Kunk. “Those are the type of people that will bring great knowledge and passion to us.”

For Jeff Lightner ’96, being an emeritus trustee gives him the opportunity to stay in touch with his alma mater and to add value.

“I’m certainly honored to be an emeritus trustee,” said Lightner, “and I think it comes with a responsibility. The responsibility that I have is to be an ambassador in the community about all of the great things that are happening at the university and the foundation.”

Along with continuing his role as a longtime ambassador for Wright State, emeritus trustee Malte vonMatthiessen looks forward to sharing his past experiences with current and future trustees.

“All of us together bring an important historical context, because we’ve been involved over decades as part of this institution,” said vonMatthiessen, who co-chaired Wright State’s first campaign Tomorrow Takes Flight. The campaign concluded in 2006, raising $123.1 million.

“I’ve had the privilege of being involved in education for a long time,” said vonMatthiessen. “I’ve always had a particular interest and passion for Wright State University and how it was originally conceived. Wright State serves a very unique and important role in our broader community.”

Like vonMatthiessen, emeritus trustee Joe Gruenberg is not a graduate of Wright State. Through his service on the foundation board, he has developed a deep appreciation for the university and the impact it makes on students.

“What keeps me engaged is to listen to students and their stories about how their lives changed because of foundation scholarships and how the university enabled them to continue their education,” Gruenberg explained.

Michael Di Flora ’72 served on the foundation board because he wanted to make a difference. He hopes to continue to share his expertise and influence the future of the foundation as an emeritus trustee.

“You can’t make a difference if you’re not on the team,” Di Flora explained. “As long as you stay in the game, there’s always an opportunity to make a difference and have an influence on the future success of the organization.”

As board chair, Kunk welcomes the wisdom that the emeriti trustees bring from their diverse business backgrounds and walks of life. She acknowledges that each trustee was integral in helping the foundation get to where it is today and she wants their voices to be part of where the foundation heads tomorrow.

“We’re looking at alternative revenue sources and how we structure the foundation, so I do see a lot of opportunities for them to engage,” said Kunk, who has already recruited some of the emeriti trustees to serve on the Students First Fund committee, a grants program that helps fund student success initiatives at the Dayton and Lake campuses.

For Ron Amos ’76, serving as an emeritus trustee is just one more way of giving back to the university that has changed the lives of more than 110,000 alumni.

“Look at the impact Wright State has had on this community,” said Amos. “Imagine if Wright State had never existed. We would be far inferior to where we are today.”