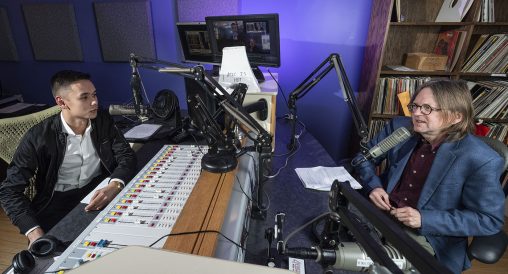 Ask Sean Wilson to describe his political radio show “Good Politics” and he’ll tell you it’s unlike anything you will hear on the radio or online.

In each episode, Wilson, a professor of political science at Wright State University, and his co-host, Adam Wightman, a senior majoring in electrical engineering, discuss the latest news in American politics. Recent shows have focused on the coronavirus pandemic, the impeachment of President Trump, the growing deficit, and jobs and the economy. Their discussions focus on providing context and information without taking sides.

“What we’re trying to do is talk about politics while we consciously have no affiliation, and it’s tough because Trump is a divisive president,” Wilson said. “But we take the position that we’re not going to be pro or anti, we’re just going to describe the various ways that this is seen.”

He compared themselves to announcers calling a football game. “We’re telling people what to watch out for in the game,” he said. “Somebody has to be in the booth just calling the game.”

Weekly episodes of “Good Politics” air on WWSU 106.9 FM from 8:30 to 9:30 a.m. on Mondays and Wednesdays and from 10:30 to 1130 a.m. on Tuesdays and Thursdays. The show is available as a podcast on popular services including Apple Podcasts, Goggle Podcast, iHeart Radio and Spotify, as well as on the web and on YouTube.

Because WWSU is temporarily closed because of coronavirus pandemic, Wilson and Wightman have only recorded one new show since early March. Their final show of the spring semester focuses on the pandemic, depression economics, the federal stimulus package and economic recovery.

Wightman plays the role of host, interviewer and listener all in one. He often introduces a short news clip, which Wilson has selected, often a government official or politician, then summarizes what was said, setting up Wilson to provide further context.

“My questions are there to keep it on a level everybody can understand,” Wightman said.

Using news clips, Wightman said, keeps the discussion bound to facts. “It helps me and our listeners be able to read the media and know what to look out for,” he said. 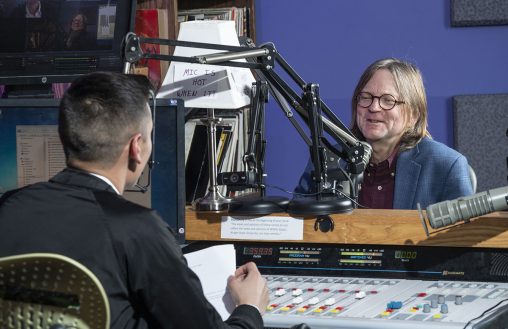 Although Wilson and Wightman had to halt recording “Good Politics because of the coronavirus pandemic, their final episode of the spring semester focuses on the pandemic.

Wilson designed the format of the show in response to trends he sees in political coverage by the media, especially political talk radio.

“Radio is awful,” he said. “Radio politics is abysmal.”

Wilson thought there was a market for a centrist political show that didn’t have an allegiance to a political party, politician or cause. Conservative programming dominates political talk radio, he said, while liberal radio programs usually fail.

“If that marketplace had centrist radio, that would be politically effective because it would be an alternative,” he said.

“We can’t find allegiance-free radio,” Wightman said. “I’ve tried, but all I found was Fox affiliates and NPR. We hope to create a place where you can listen to the biggest stories in politics and economics without the lens of a single political narrative.”

Wilson says politics is marketed like a religion. “You have an affiliation in church, you go to one building, get a certain message,” he said. “If you have a different affiliation you are assigned to a different building and you get a different message.”

Wilson is influenced by postanalytic thought and Ludwig Wittgenstein, considered by some to be one of the greatest philosophers of the 20th century. Postanalytic thought teaches that you have a duty to understand a rival and a rival way of thinking, Wilson said. Considering a rival point of view, he said, can help you see things in a more comprehensive point of view.

Wilson says the concept for “Good Politics” comes from how he approaches his job of teaching students in the classroom: leave political affiliations at the door, do not endorse, present the lesson.

“I tell my students I don’t care what they are — if they’re liberal or conservative. I want them to be smart,” Wilson said. 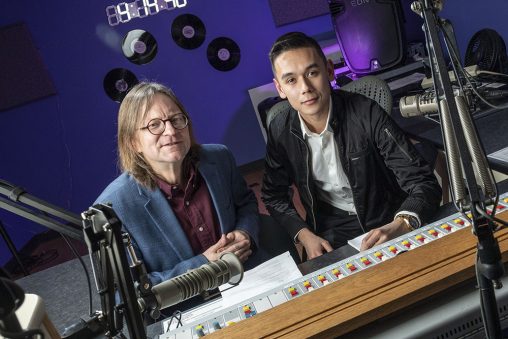 Sean Wilson thinks the student-professor format of “Good Politics” can be a model for other shows and podcasts.

Although he does not have a background in politics, Wightman does have experience in radio. He has served as the station manager of WWSU and also works part-time for WHIO Radio, where one of his responsibilities is to help produce the Rush Limbaugh show in the Dayton market.

The partnership between Wilson and Wightman wasn’t planned. Wightman initially offered to help Wilson produce a demo of the show after the professor contacted WWSU with his idea for a radio show. However, after recording the demo, Wightman liked the concept of the show so much he wanted to remain involved in “Good Politics.” They started recording during the summer of 2019.

Wilson said other faculty members are interested in starting their own radio shows or podcasts. He also thinks the student-professor format of “Good Politics” can be a model.