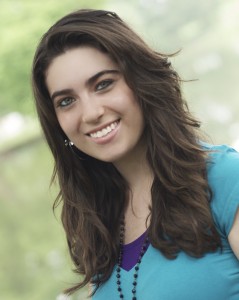 The CW Star is a part-time employee of Dayton’s CW television network. The position goes to the winner of a contest judged partly by audience votes. Zapata auditioned against nearly 80 other hopefuls and was chosen as one of nine finalists and 10 semifinalists.

Wright State student Brandy Zapata has a big smile and a bubbly personality. She’s an actor, dancer and a student leader, and now she’s on TV as the CW Star.

“Because I’ve been a singer, a dancer, an actress for so long,” she said, “being in front of people is not a big deal to me and talking to people is pretty natural.” So far, she’s appeared on the street handing out CW swag with other contestants, on local radio, online and in a CW Star promo on television.

Zapata’s new responsibilities as CW Star include managing Facebook and Twitter accounts detailing her activities and news about the CW. She also zips across Dayton shooting promotional videos for Dayton area events.

The CW Star is a part-time employee of Dayton’s CW television network. The position goes to the winner of a contest judged partly by audience votes. Zapata auditioned against nearly 80 other hopefuls and was chosen as one of nine finalists and 10 semifinalists.

The contest included promotional YouTube videos, a professional makeover and dozens of public events, so Zapata and the other contestants were able to stretch their social muscles.

Zapata was declared the victor after a private interview with the organizers of the competition.

She says she’s glad she waited until now to audition—she graduates in June, and with all that free time she’s planning on diving into her role as CW Star. Right now, her calendar is crammed with Wright State business.

“If I had done it last year and somehow magically won,” she said, “it would have been really hard to do it during my senior year.”

Zapata works in Office of the Vice President of Student Affairs and as assistant speaker of the house for Wright State’s Student Government. She’s co-president of the College of Liberal Arts dean’s student advisory board, vice president of Wright State’s chapter of the National Residence Hall Honorary, a member of the Omicron Delta Kappa leadership honor society, coordinator of the President’s Ambassador Program, a member of the Troupe theatre club and a supporter of Operation Smile.

On top of all of that, she’s managing to work in a few CW Star events here and there.

“I have a planner and I write everything down, and I somehow appear at everything,” she said.