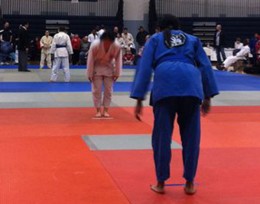 Judo is taught largely in Japanese, making international competition easy. Now, in 2012, judo is the only marital art recognized by the Olympics and the most practiced individual sport in the world.

A Russian competitor meets his English rival on the floor. A French referee gives the signal and the match begins. The remarkable thing? All three of them are speaking in Japanese.

That ease of communication is a feature of judo, a martial art developed by doctor Jigoro Kano in 1882. Kano envisioned a truly international sport, spanning borders and oceans.

Judo is taught largely in Japanese, making international competition easy. Now, in 2012, judo is the only marital art recognized by the Olympics and the most practiced individual sport in the world.

On May 5 at 9 a.m., judo competitors from across the region and the country will fill the Wright State Nutter Center for the Wright Way Judo Tournament. Spectators are welcome and parking and entry are free.

People expecting Karate Kid-style kicks and jumps will be surprised. Judo is made up of grappling, choke-holds and throws. Competitors get up close and personal.

“The basic distinction is that judo is a defensive art,” said Mark Curry, judo instructor at Wright State and at the Dayton Martial Arts Center. “Judo utilizes off-balancing to defeat an attacker.”

The Wright Way tournament will feature male and female competitors of all ages, from a demonstration category for 3-year-olds all the way up to the masters category, including participants in their 60s. “It runs the total spectrum,” said Curry.

Some of the competition will be fierce. Curry expects experienced martial artists from around the country.

“Lots of the guys who are Olympic competitors are making a lot of these regional tournaments just to hone in and get ready for the trials,” he said.

Curry himself has been on the U.S. judo team and a multiple-time national and state champion. In March, he celebrated 45 years in judo.

At the tournament, Curry will lead a team of martial artists from the Dayton Martial Arts Center. There are prizes for first, second and third places in individual and team categories and awards for the best technician in junior and senior classes.

“We have our eyes on the first-place team trophy,” said Curry.