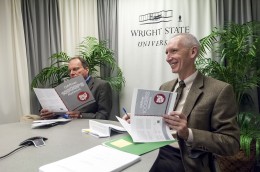 “Governor, the network is operational,” came the Skype-delivered message via statewide videoconferencing. Excited about the moment, Ohio Governor John Kasich responded with a wide smile, “That was something.”

“This is the definition of cool,” said Kasich. “This is like 4G times a billion. This is the real thing where we can send amazing amounts of data with fast transfers. It has unlimited potential to the state of Ohio. People are going to flock here because of this.”

In a videoconference connecting 10 cities and universities, Kasich fulfilled a State-of-the-State promise to dramatically increase Ohio’s Academic Resources Network (OARnet) bandwidth from 10 to 100 gigabits per second (Gbps), improving the high-speed access for research-inclined businesses and institutions like Wright State University.

Kasich said the upgrade is the first-ever state-led initiative of its kind in the country.

Langos and Sudkamp were linked into the live video conference from a conference room in the TV Center on the Dayton campus. Eight other pairings of educators and industry leaders across the state also participated.

“Carrying the legacy of innovation and entrepreneurial spirit, Wright State is celebrating its 45th anniversary of educational excellence,” said Wright State Interim Provost Thomas Sudkamp when the Dayton site was called upon for comment live via the Internet. “We too are very enthusiastic about OARnet’s greatly enhanced bandwidth to the Dayton area.”

“This upgrade will attract more companies to Ohio, more job creators. It will also help tremendously for collaborating with institutions of higher learning for scientific and industrial projects, thereby generating new economic developments for the state.”

How fast is the network now? Fast enough to transfer the data equivalent of 80 million text-filled file cabinets a day, or fast enough for all 1.8 million of Ohio’s K–12 students to download an ebook at the same time on the network.

Kasich announced that the network upgrade was completed on time and on budget at a cost of $11.2 million. Before the upgrade, Ohio already had more fiber-optic broadband installed per capita than any other state in the country with a network backbone of more than 1,850 miles.