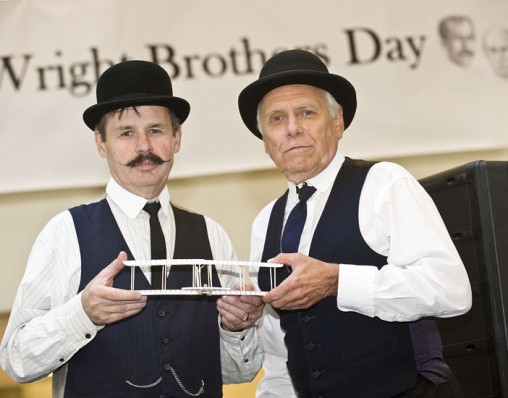 Wright State University will celebrate the innovative spirit of both of its namesakes, as well as its researchers who currently work on campus, with the third annual Wright Brothers Day.

Organized by the Wright State Marketing Club, a student organization, the event takes place Monday, Oct. 7, from 11 a.m. to 2 p.m., in the Student Union Atrium.

Wright Brothers Day marks the anniversary of Wilbur’s 39-minute flight on Huffman Prairie in 1905, demonstrating that the Wrights had advanced their design to the point of a practical airplane.

The program will include historical and technology displays, food and a keynote address by retired Lt. Gen. Jack Hudson, director of the National Museum of the United States Air Force.

Through Wright Brothers Day, the Marketing Club is connecting the Wright brothers’ innovative spirit with the same spirit found on campus today. To highlight that spirit, the event will include displays featuring innovative projects from Wright State researchers and organizations.

These include the Living Laboratory from the College of Nursing and Health; Calamityville, the National Center for Medical Readiness; a smartphone app that reads an individual’s health, designed by Kno.e.sis, an Ohio Center of Excellence; and examples of aerial surveillance technology. The Wright State Research Institute will highlight its neuromedical imaging program, and attendees can explore WSRI’s groundbreaking work with the help of the Wright State Brain Scan app, an augmented reality program that features a 3D virtual brain. 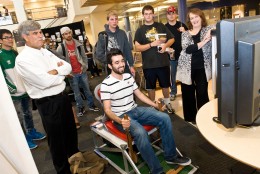 Attendees can fly like Wilbur and Orville by trying out the Wright flyer simulator at Wright Brothers Day Oct. 7.

“Wright State is becoming more and more known for innovation,” said Jared Holloway, co-president of the Marketing Club. “We want to expose students to some of the best innovations being produced by the campus and the community.”

Hudson will deliver his keynote address around 11 a.m. “The National Museum of the United States Air Force is located only a few miles from where Wilbur and Orville lived, studied and changed the world forever by solving the mysteries of flight,” Hudson said. “Their historic flights make military aviation possible, changing forever the nature of warfare.”

Wright Brothers Day was originally designed to raise awareness among students about the accomplishments of Wilbur and Orville Wright, who invented the airplane in their Dayton bicycle shop and conducted most of their early test flights on Huffman Prairie, close to where Wright State’s Dayton campus stands today.

Attendees can also learn more about the Wright brothers’ flights in Europe through a display by the Wright State Special Collections and Archives, which houses one of the most complete collections of Wright material in the world.

The exhibit will feature vintage aviation art lithographs depicting the explosion of flight in 1909 and highlight photographs of the Wrights flying in France, Italy and Germany in 1908 and 1909.

“Their European flights established them as the leaders in controlled powered flight and propelled them to world fame and honor,” said Dawne Dewey, head of special collections and archives.

Wright brother impersonators Tom Benson and Roger Storm, who work at the NASA Glenn Research Center in Cleveland, will also make an appearance.

Gov. John Kasich will recognize this year’s event by proclaiming Oct. 5 Wright Brothers Day in Ohio. Oct. 5 is a Saturday, so the event was moved to Monday, Oct. 7.