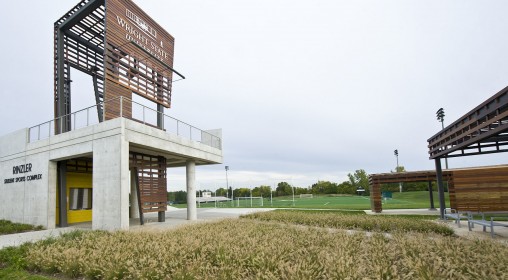 The Rinzler complex was one of 145 projects featured in the portfolio and the November issue of American School and University.

The jury described the complex as having a “very innovative and sensitively integrated approach to function and entry into campus.”

Opened in the 2012 Spring Semester, the Rinzler Student Sports Complex was designed as a hub for Raider athletics and all other students through Campus Recreation. With a prominent sign tower, the new facility also welcomes visitors as they enter the northeast corner of campus.

The complex includes a support building with restrooms, team rooms and concessions. A sleek observation ramp provides an easy, accessible perch to watch events and games.

Over the last two seasons, the varsity soccer field hosted 30 women’s and men’s soccer games, which attracted a total of 12,716 spectators.

The complex was designed by Annette Miller Architects, a Dayton firm that has worked on numerous projects on the Wright State campus.

Read more about the American School and University Architectural Portfolio.