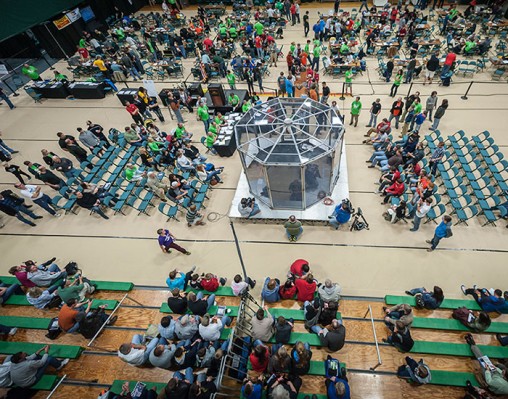 In Xtreme BOTS, students design and build remote-controlled robots that battle in head-to-head competitions, trying to cause maximum damage to their competitor’s robot.

Teams of high school and college students will battle one another with remote-controlled robots when Wright State University hosts the Ohio Robotics 2014 Spring Xtreme BOTS Competition.

The competition runs from 9 a.m. to 4 p.m. on Saturday, March 22, on the Wright State Nutter Center main floor. The day will conclude with an awards ceremony. Tickets are $5 per person and are available at the door.

A Manufacturing/Workforce Development Career Exhibit will run concurrently with the event.

More than 200 high school and college students, including a team representing Wright State’s Dayton Campus, are expected to participate in the competition.

In Xtreme BOTS, students design and build remote-controlled robots that battle in head-to-head competitions, trying to cause maximum damage to their competitor’s robot by ramming, flipping and using a specially built weapon.

The robots are limited to no more than 15 pounds and come in all kinds of shapes, from wedges to rectangular blocks to squat cylinders. Teams consist of at least three students and one adult coach.

Each match lasts three minutes, unless one of the bots is knocked out. For the spring competition, a software system will judge contests that do not end in a knockout.

This is the second Xtreme BOTS Competition Wright State has hosted. The fall competition attracted more than 40 high school and college teams from around the Miami Valley.

More information on the competition and Ohio Robotics is available on the organization’s website.