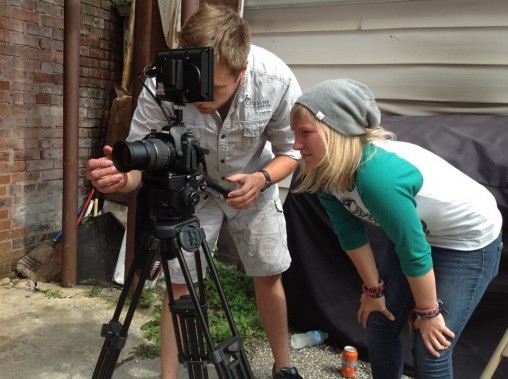 Victor Pham is anything but ordinary. A few years ago, he escaped gang life by moving to rural Defiance, Ohio. By day, he gives manicures and pedicures out of his salon. By night, he coaches mixed martial arts fighters.

Pham’s inspiring story has been seen by thousands across the country with the help of two Wright State University alumni. He stars in Punches & Pedicures, a short documentary produced by Ashley Brandon and Dennis Hohne, both of whom graduated in 2013 from Wright State’s Motion Pictures program.

After being screened at film festivals through the United States and winning a number of regional voting rounds, Punches & Pedicures has been nominated as a finalist in the Documentary category in the prestigious 41st Student Academy Awards.

“It is such an honor to even be considered,” said Brandon. “I was really surprised to have made it to the final stage, so many strong films were submitted.”

The Student Academy Awards were established in 1972 to support filmmaking at the collegiate level. The competition brings together student filmmakers from all over the country to compete for awards and cash grants. Three winning films are selected in each the competition’s five categories. Past Student Academy Award winners, like Spike Lee, Trey Parker, Pete Docter and John Lasseter, have since gone on to bigger and better cinematic success. 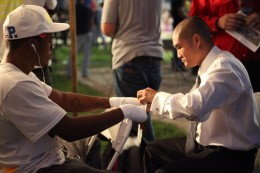 A scene from Punches & Pedicures, a documentary about a Vietnamese immigrant who teaches  troubled youth mixed martial arts out of a nail salon.

Brandon first learned of Pham’s inspiring story when she was home for winter break a few years ago. She was driving through downtown Defiance and saw the windows of a nail salon fogged up. Upon closer inspection, she saw a handful of rugged men beating up one another. Instantly curious, Brandon realized, “I have to film this!”

After Pham eagerly agreed to cooperate with Brandon and Hohne, the production for Punches & Pedicures was in full swing.

“We shot over 85 hours of footage, and only 15 minutes made it into the film,” said Brandon. “Although the process of creating the film was long, it was also an amazingly fun experience. This is a culmination of my film skills so far.”

The final result of Punches & Pedicures turned out to be much, much more than what Brandon initially saw. What started as a story about a man with an unusual occupation with an even more unusual hobby eventually became an inspiring tale of success, courage and triumph over unfavorable circumstances.

Brandon said Pham’s philosophy is that everyone has significance and that it is always possible to change your lot in life. She said Punches & Pedicures really works to convey that.

“I feel that Punches & Pedicures should win Best Documentary at the Student Academy Awards because we’re different,” said Brandon.

“When people think of documentary they often imagine a dry, boring, sad story—which is unfortunately true half the time,” she said. “Punches & Pedicures is flashy, funny and inspirational. It’s a fun film to watch.”

The training and education Wright State’s Motion Pictures program provided Brandon and Hohne made their success possible, she said.

“The program is second to none,” said Brandon. “Whether they’re teaching production or theory, Wright State’s Motion Pictures faculty is the best in the country. Also, the alumni are so incredibly supportive. Everyone rallies around one another to make each other’s goals happen.”

The Student Academy Awards ceremony will be held June 7 at the Directors Guild of America Theater Complex in Los Angeles. The ceremony is free, but advanced tickets are required. Tickets can be obtained at www.oscars.com.

“Even though we have only made it to the finals,” Brandon said, “I already feel like a winner.”