Grabbing a box of Bill’s doughnuts and Starbucks coffee, Melissa Spirek, Ph.D., hurried to the Cox Media Center in Dayton for a meeting that would transform the mass communication program at Wright State University.

Spirek, chair of Wright State’s Department of Communication, along with Jeffrey Bruce, former editor of the Dayton Daily News and Wright State’s first full-time journalist in residence, laid out a proposal to create a news bureau using students. Dayton Daily News Managing Editor Jana Collier was on board immediately, and the Cox Media Project was born.

But even Spirek wasn’t prepared for Bruce’s enthusiasm. He was ready to start Winter Quarter 2009—just one week away. Of course that’s the kind of deadline you would expect from a veteran journalist.

“This is maverick; this is so out of the box,” said Spirek. “It gives students unprecedented access and opportunities.”

Students learn journalism fundamentals in the classroom and then develop their own story ideas. The best are submitted to the Dayton Daily News for consideration. If published, students earn a byline to add to their portfolios. The stories may appear in multiple media, such as any of the Cox Media Group (CMG) newspapers, TV, radio, or online platforms.

Five years and 3,800 news items later, the cutting-edge program has become a model for university/media partnerships across the country.

“It’s a win-win for everybody,” explained Bruce. “The newspaper gets additional resources to cover things that otherwise would simply elude them because no newspaper could possibly cover all these things, and the students in the journalism program get actual, live-fire experience that would be impossible to get in the classroom. And the readers win because they get additional coverage.” For example, a student covered Board of Education and village of Yellow Springs government meetings, which were not covered regularly.

“We called that first group of students the SEALs because they were hungry and did whatever it took,” said Spirek. One of those “SEALs” was Andy Sedlak, now a WHIO television reporter and Associated Press award-winner.

“It’s a ‘do’ business,” Sedlak said. “You have to be in motion and in action. And I thought that was a great help for me.”

He sought out every opportunity to grow as a journalist while at Wright State, including hosting radio shows on WWSU and co-hosting “Really, Wright State?” a humorous video blog associated with The Guardian campus newspaper.

“You’ve got to ask a lot of questions and not be afraid to answer those questions,” said senior Andrew Smith. “You just need to dig.” He learned to “dig” even deeper through news writing classes, as sports editor for The Guardian, and through a coveted summer internship at CMG.

Bruce envisioned the Cox Media Project after reading a Poynter Institute whitepaper that suggested metro newspapers would need to collaborate with universities to adequately cover community news. Spirek, a former investigative reporter for the Cleveland Plain Dealer and professor at Bowling Green State, shared his vision. Today, Bruce’s brainchild is the longest continuous collaboration of this format between a major Ohio newspaper and a university.

Ray Marcano, who was responsible for helping CMG properties grow their digital audience and was the president of the Society of Professional Journalists, joined the project in its second quarter. With his expertise, the mass communication program has been evolving almost as quickly as journalism itself to include new digital platforms. Journalists today are often required to be multimedia reporters capable of writing and producing video stories and online content. 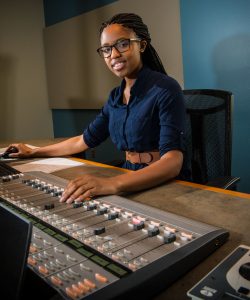 Jasmine Higgins, a senior Mass Communication major, said her internship at News 95.7 WHIO took the mystery out of what the industry is like.

“Video is huge,” Marcano said. “Video is the fastest growing content component on any platform.” He and Spirek recalled a student video about a single mother working for minimum wage who would go without food to feed her children. Tennye Griffin followed her on an RTA bus to tell her story. “It blew us away,” Marcano offered.

“I love this job,” said Marcano, who is also a Fulbright Fellow. In fact, he loved teaching so much he retired early to teach full time. Now he is designing a digital lab, with support from Kristen Sobolik, Ph.D., dean of the College of Liberal Arts.

“Simply reporting the news now is not good enough,” Marcano added. “Getting it out on the platform when and where people want it is the key to success.” Students in the Advanced News Writing class have even created their own digital media platform at dailyflipz.com.

Ken Paxson, a graduate of the mass communication program, has moved from being a student in the program to teaching news writing as an adjunct professor. Paxson, representing CMG, and Marcano, representing Wright State, lead the Cox Media Project today.

As coordinator of organizational development for CMG, Paxson heads up the internship program and has worked with journalism students since 2008. He recently announced an exclusive internship collaboration between CMG and Wright State in which 10 students will get various media internships each summer.

“Our project would never have gotten off the ground nor have been sustainable without the enthusiastic and continuing support of Jana Collier and her colleagues at Cox,” Bruce concluded. Today Collier is the vice president of content. “Cox is pioneering innovative approaches in the gathering and distribution of news, and Wright State is fortunate to have such a farsighted partner as we develop new ways to train young journalists.”

Although 82 graduates of the communication program are employed by CMG nationally, others apply their skills to fields such as public relations, law firms, and marketing. “This is not just a journalism theater,” said Spirek. “These are people who can take vast amounts of information and write clearly on deadline.”