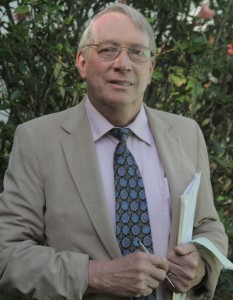 Boston College film professor John Michalczyk will screen his documentary on Nazi doctors’ role in the Holocaust and lead discussion with Holocaust survivors and concentration camp liberators on March 19.

An award-winning documentary film about how Nazi doctors contributed to the Holocaust will be shown at Wright State University as part of an event featuring the film’s producer as well as Holocaust survivors and concentration camp liberators.

“In the Shadow of the Reich: Nazi Medicine,” which has earned a Distinguished Media Award, will be shown on Thursday, March 19, at 7 p.m. in the Student Union Apollo Room.

A public reception featuring survivors, liberators and topical resource tables will be held before the documentary and discussion, at 5:30 p.m.

Sponsored by the Office of the President and University Libraries, the program is free and opened to the public.

The event will feature a discussion with the film’s producer and director John Michalczyk, Ph.D., professor and director of film studies at Boston College. He teaches a course that examines how physicians participated in euthanasia and then descended into torture, “medical” experimentation and extermination.

Michalczyk has published 12 books from 1977 through 2014, including “Filming the End of the Holocaust: Allied Documentaries” and “Nuremberg and the Liberation of the Concentration Camps,” and nine chapters in edited scholarly works.

He has also produced 22 films, including “Writing on the Wall: Remembering the Berlin Wall,” “The Cross and the Star: Jews, Christians and the Holocaust” and “Creating Harmony: The Displaced Persons Orchestra from St. Ottilien.”

Michalczyk says “In the Shadow of the Reich: Nazi Medicine” is one of his most rewarding and successful documentaries.

“Individuals will learn about how Nazi doctors contributed to the Holocaust,” he said. “There was a doctor who joined the Nazis and experienced the brutality. He came to Auschwitz to be reconciled and filmed in 1995.”

The Wright State University Medicine and the Holocaust First Community Seminar, featuring Michalczyk, is an outgrowth of the Medicine and the Holocaust class for fourth-year students at the Wright State Boonshoft School of Medicine. The course considers ethics, law, philosophy, psychology, religion, the right to life, conscious feelings and medicine when contemplating the right course of action within a medical situation.

David Shuster, M.D., clinical assistant professor of orthopaedic surgery at the Boonshoft School of Medicine, directs the course, which includes physicians and Holocaust and concentration camp survivors as guests.

“During this comprehensive course students learn how physicians, devoted to the goal of helping people, could become active participants, first in euthanasia and then in torture, so called ‘medical’ experimentation and finally mass extermination,” said Shuster.

Michalczyk said that throughout history genocide has been abetted by individuals who failed to act. He calls it the bystander effect.

“You can’t be passive when something evil or unethical occurs,” he said. “When you close your eyes to it, you’re becoming a bystander.”