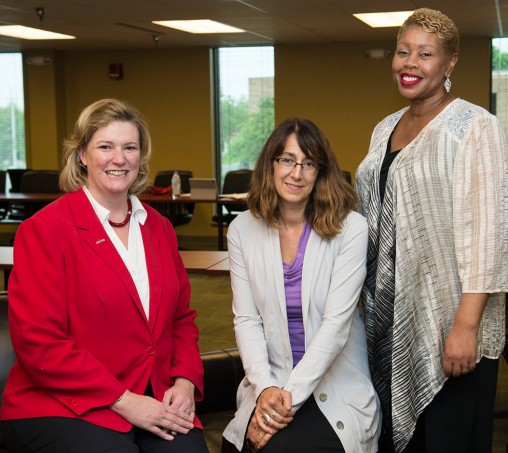 Dayton Mayor Nan Whaley ’09, left, is working with Kelli Zaytoun, interim director of Wright State’s Women’s Center and associate professor of English, and Kimberly Barrett, vice president of multicultural affairs and community engagement, to launch the Women’s Leadership Collaborative of Greater Dayton, which wants to increase the number of women in the region who hold leadership roles in government, education and business.

Wright State University and Dayton Mayor Nan Whaley have collaborated to create a new organization designed to cultivate and support women leaders around the Miami Valley.

The Women’s Leadership Collaborative of Greater Dayton seeks to increase the number of women in the region who hold leadership roles in government, education and business.

The collaborative will identify and support emerging mid-level and mid-career women, as well as leaders working in uncommon areas.

A goal of the effort is to help women “move into higher levels of leadership or begin to participate in leadership roles in the community,” said Kelli Zaytoun, interim director of Wright State’s Women’s Center and associate professor of English.

Kimberly Barrett, vice president of multicultural affairs and community engagement at Wright State, said what sets the Women’s Leadership Collaborative apart from other leadership organizations is its strategy of identifying and supporting latent leaders, or women who may be leaders but are not necessarily recognized for it or are working in uncommon areas.

“In order to create a pipeline for more women’s leadership you do have to look at those people who are not the usual suspects,” Barrett said.

“For it to be housed at Wright State is very important to me,” said Whaley, who graduated from Wright State in 2009 with a Master of Public Administration. “I think the women’s studies program, the commitment to that kind of leadership is something that Wright State can demonstrate across the community and the region.”

Whaley said the region not only needs more women in leadership positions but also women who can be groomed to take on future leadership roles.

The Women’s Leadership Collaborative will hold its first leadership retreat for about 16 selected women on Aug. 6 and 7 at Deer Creek State Park. The Dayton Foundation provided support for the retreat.

The retreat will be facilitated by Jenny Heckscher, program director of gender initiatives in STEMM at The Ohio State University, and Amanda Shaffer, director of the Office of Faculty Development at Case Western Reserve University and head of Shaffer Coaching.

Other initiatives planned by the collaborative include facilitating networking among women leaders, mentoring programs to help women and teenage girls develop the skills necessary for effective leadership and providing community service and philanthropic opportunities.

The collaborative will also coach influential community members interested in being allies for gender equity.

For more information on the Women’s Leadership Collaborative, contact the Wright State Women’s Center at 937-775-4524.