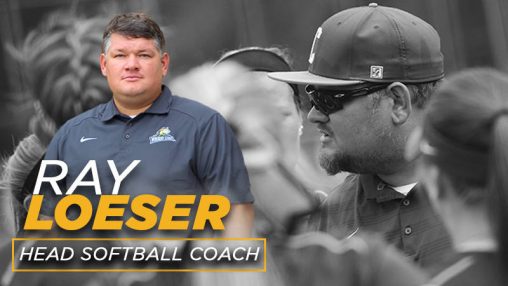 Ray Loeser, the head coach at the University of Charleston in West Virginia the past five seasons, has been named as the head softball coach at Wright State University.

“We are so excited to welcome Coach Loeser to the Raider family,” said Joylynn Brown, associate athletics director and senior woman administrator at Wright State. “The moment you meet Ray, his passion and enthusiasm for the sport of softball is obvious. The success he has had at the Division II level made him really stand out to the committee. His team winning 50 games and competing in the Division II World Series last season obviously impressed us. He knows how to win, and he also understands our mission to create the best experience possible for our student-athletes, both on the field and in the classroom. We are confident Ray will continue the strong Wright State softball tradition and are looking forward to where he will lead the program.”

Loeser directed Charleston to its best season ever in 2016 as the Golden Eagles finished with a school-record 50 wins (50-12), won the NCAA Atlantic Regional and Super Regional titles and advanced to the NCAA Division II College World Series in Denver. Charleston ended the season ranked #8 in the final National Fastpitch Coaches Association Division II Top 25 poll, the first national ranking in program history.

Winners of 25 straight regular-season games during April, Charleston claimed the NCAA Atlantic Regional title with a win over Lock Haven and two victories against Kutztown. The Golden Eagles then defeated West Virginia Wesleyan twice in the NCAA Atlantic Super Regional before facing Adelphi and Southern Arkansas in the College World Series.

Charleston made its first-ever NCAA postseason appearance in 2015, advancing to the Atlantic Region Finals while posting its third most wins in a season with 38.

“I am truly grateful and humbled for the opportunity to lead the Wright State softball program,” said Loeser. “A big thank you goes to Bob Grant, Joylynn Brown and the search committee for having the faith in me to be their next leader of such a successful program. Throughout this process I was able to tell that the dedication to their student-athletes is a large reason for the success of the Raider nation.”

“As for now, WSU has a solid nucleus that competes year in and year out for the top spot in the Horizon League,” added Loeser. “I have seen the roster that returns from the conference tournament championship game, and I am anxious and excited to get on the field. I look forward to continuing to build their success.”

Before coming to the University of Charleston, he spent four seasons as the assistant softball coach at Arkansas Tech University. In that role, he was the recruiting coordinator, hitting coach and pitching coach of a program that won three Gulf South Conference West Division championships in four years.

Prior to Arkansas Tech, Loeser spent two seasons at St. Petersburg College in Florida, in which they won a Suncoast Conference title. Loeser began his coaching career as a student-manager at Mississippi State.

Loeser is a 2005 graduate of Mississippi State with a bachelor’s degree in business administration in information systems. He and his wife, Karie, were married last November.