With a heart for serving others and for engaging Wright State students and faculty, Sally Lamping exemplifies Wright State’s mission while filling a genuine need in the community.

Lamping is an associate director of integrated language arts and professor in the Department of English Language and Literatures and has a joint appointment in the College of Education and Human Services and College of Liberal Arts. 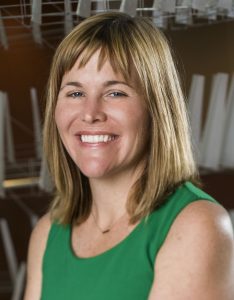 All of Lamping’s marvelous projects with those in need in the local community are intimately connected to both her teaching and scholarship. Her innovative and creative pedagogy builds bridges while empowering minority populations with the valuable tools of literacy.

She has served as an advisor and partner with the English as a Second Language Program in the Dayton Public Schools. She also helped launch the International Partnership Program at Longfellow Academy in the Dayton Public Schools. Partnering with the Internships and Community Engagement Program in the College of Education and Human Services, the International Partnership Program provides opportunities for students and the Wright State community.

Additionally, she is involved with Welcome Dayton as an advisor for the Natural Helpers Program, which provides support services for new residents in Dayton’s immigrant communities.

Among her many awards and grants, Lamping was named a William J. Fulbright Senior Research Scholar, giving her an opportunity to work in South Australia with refugee populations at schools and universities and train about 100 teachers on literacy and language methods.