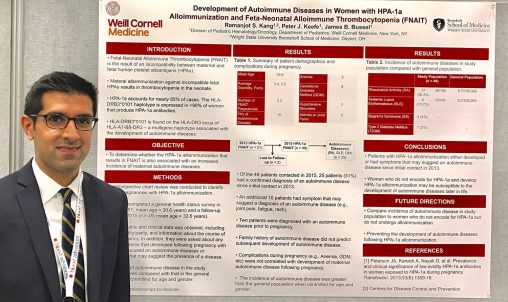 Research by Ramanjot Kang, a third-year medical student at the Boonshoft School of Medicine, is the first study to provide data about the frequency of autoimmune diseases following pregnancies affected by a Fetal-Neonatal Alloimmune Thrombocytopenia, a blood-related disease that affects newborns.

A Wright State University Boonshoft School of Medicine student’s research is the first study to provide data about the frequency of autoimmune diseases following pregnancies affected by a Fetal-Neonatal Alloimmune Thrombocytopenia (FNAIT), a blood-related disease that affects newborns.

Ramanjot Kang, a third-year medical student at the Boonshoft School of Medicine, presented an abstract at the American Society of Hematology (ASH) Annual Meeting, Dec. 3-6, in San Diego. His presentation was recognized with an Abstract Achievement Award.

The abstract, “Development of Autoimmune Diseases in Women with HPA-1a Alloimmunization and Fetal-Neonatal Alloimmune Thrombocytopenia (FNAIT),” focused on whether the immune response that results in FNAIT in newborns is associated with an increased incidence of autoimmune disease in mothers.

During pregnancy, platelets are able to cross the placenta. In some cases, these platelets have antigens, substances that the immune system views as foreign to the mother’s body. Antibodies form, destroying the platelets. This incompatibility is referred to as alloimmunization. Studies show that mothers with specific genes are predisposed to developing incompatibilities. The genes that predispose mothers to developing incompatibilities also are associated with several autoimmune diseases, including type 1 diabetes, systemic erythematous lupus and rheumatoid arthritis.

In June, Kang was one of 14 medical students nationwide selected to participate in the American Society of Hematology 2016 Minority Medical Student Award Program (MMSAP), an eight- to 12-week research experience. The program encourages minority medical students’ interest in hematology by providing the opportunity to create and implement a hematology-related research project.

He became interested in this research topic after working with his MMSAP research mentor, James Bussel, M.D., of Weill Cornell Medicine in New York.

“While researching alloimmune neutropenia with Dr. Bussel, we realized that there really was no significant research devoted to understanding the long-term effects of these newborn conditions on the mothers who gave birth to the affected infants,” Kang said. “There was already a strong suspicion that FNAIT was linked to the development of autoimmune diseases later in life, but it had not been investigated up to that point.”

In addition to Kang and Bussel, Peter J. Keefe of Weill Cornell Medicine also was one of the researchers.

As part of the MMSAP program, Kang also worked with Mukund Dole, a pediatric hematologist-oncologist at Dayton Children’s Hospital and an associate professor of pediatrics at the Boonshoft School of Medicine who serves as Kang’s career development mentor. Dole is also the medical director for the West Central Ohio Sickle Cell Center based at Dayton Children’s.

All 14 MMSAP participants were asked to present an update on their research at the annual Promoting Minorities in Hematology Presentations and Reception. Kang also submitted his abstract to the ASH Annual Meeting and was accepted to present a formal poster presentation.

“Having an abstract accepted is a really big achievement but earning an Abstract Achievement Award on top of that is a very big honor,” Kang said. “I was really proud to be able to represent the Wright State University Boonshoft School of Medicine at such a large national meeting alongside the leaders from their respective areas of hematology.”

Kang presented the abstract alongside resident physicians, fellows and researchers that have been training in the field for years. Kang’s poster presentation was in a large setting in which individuals were able to see the latest cutting-edge research being conducted in the area of disorders of platelet number or function. Researchers from around the country asked him about his findings and the implications of his work.