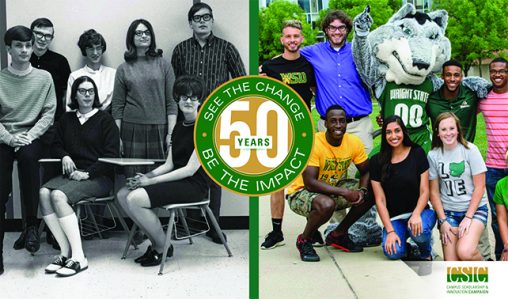 Wright State University’s annual giving campaign for faculty, staff and retirees gets underway on Thursday, March 9, with a kickoff celebration from 4 to 5 p.m. in the Student Union’s Endeavour Room.

Inspired by the university’s 50th anniversary, the theme of this year’s Campus Scholarship and Innovation Campaign (CSIC) is “50 Years: See the Change. Be the Impact.”

The March 9 kickoff festivities will include retro-themed refreshments, trivia and prizes to celebrate the early days of Wright State University.

“CSIC is all about our students,” said Amy Jones, director of annual giving. “Donor support can be directed to scholarships and program funds which can impact our students and help them succeed.”

Like any previous CSIC, faculty, staff and retirees may choose among Wright State’s more than 1,900 scholarships and programs when designating their gifts.

The first CSIC took place in 1978, raising more than $39,000. During the 2016 campaign, 50 percent of Wright State’s full-time faculty and staff participated, contributing more than $736,000 to scholarships, programs, research and athletics.

“Over the last 50 years, our faculty, staff and retirees have made Wright State the great university that it is today,” said Jones. “Their incredible generosity has left a lasting impact on our students. We’re counting on our Wright State family to step up once again and help support our students during this year’s CSIC.”

For the 2017 campaign, Jones hopes for 50 percent participation among Wright State’s full-time faculty and staff with a fundraising goal of $450,000.

To learn more about the 2017 Campus Scholarship and Innovation Campaign or to make a gift online, visit wright.edu/csic.