As they met for the first time in a nursing laboratory in Wright State’s University Hall, Joyce Rutherford-Donner and Micah Hurd developed an instant bond.

Even though more than three decades separate their days as Wright State students, the similarities between the two women are striking. Both were drawn to nursing because of their desire to help others. Both share a love for learning. And both women know all too well the hardships and heartaches of being a single mother going to school, raising her family and trying to put food on the table.

“There were many sleepless nights,” Rutherford-Donner said as she reflected on her time as a nursing student at Wright State in the late 1970s and early 1980s. “Those years are really a blur of sleep deprivation and just trying to keep all of these balls in the air all the time. It was a moment-to-moment life.”

The divorced, single mother of two young children also struggled with returning to school 12 years after her high school graduation.

“My high school education was no longer relevant,” she said. “I had to study really hard in order to be able to keep up and in order to keep my Pell Grants and the little bit of money I was getting.” 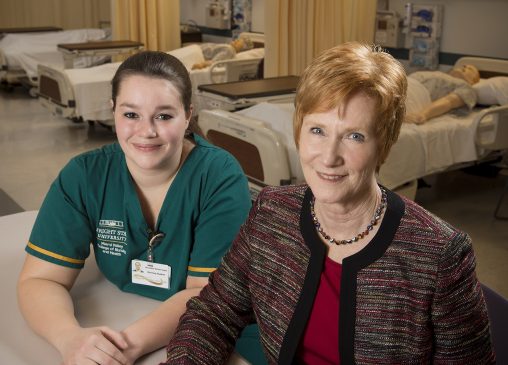 Micah Hurd, left, is the first recipient of a scholarship created by Joyce Rutherford-Donner to provide tuition, books and supplies for a nursing major who is also a single mother. (Photo by Will Jones)

Every day was a constant struggle. Figuring out her finances, keeping her grades up, trying to be a good mom, doing work-study. The pressure was incredible and often overwhelming.

But Rutherford-Donner persevered, graduating from Wright State in 1982 with a Bachelor of Science in Nursing.

Her original post-graduation plans included working in a hospital for a couple of years and then going back to school to earn her master’s degree. She wanted to specialize in her first love — geriatrics — and then start working on a Ph.D. to move into a university professorship, eventually working her way up to become dean of a nursing school.

Fortunately, Rutherford-Donner landed a full-time position in long-term care. She described the job as a “godsend,” since she didn’t have to work nights.

After working nine months as a bedside nurse, she became an assistant director of nursing — a job that she admits she wasn’t fully prepared for.

“When the doors open, I have always walked through. It doesn’t make any difference whether I think I can do it or not,” she said.

Eighteen months later, she became director of nursing and then, five years later, the nursing home administrator. Her career has also included stints as an executive director of a continuing care retirement community in Columbus and as a compliance auditor. Rutherford-Donner recently retired as a senior customer service representative for eHealth Data Solutions, a company that provides software for long-term care facilities.

Throughout her successful career, Rutherford-Donner has never forgotten the struggles of her early days as a single mom.

In December 2015, she and her husband, Larry, established the Joyce M. Rutherford-Donner Nursing Scholarship to provide tuition, books and supplies for a nursing major who is also a single mother. Micah Hurd is the first recipient of the scholarship.

A single mother of three, Hurd is slated to graduate in December 2017 and hopes to become a nurse practitioner in an emergency room. She would one day like to open a clinic to serve the poor.

“I have been in situations — still am in situations — where I need medical care and I can’t find a doctor to take my insurance,” she said. “I want to be able to help the people that need it the most.”

In many ways, Hurd’s life is a mirror image of Rutherford-Donner’s more than 30 years ago. The same sleepless nights. The constant worry about how to make ends meet. Fortunately for Hurd, the scholarship has lifted some of that burden.

“It helps so much,” Hurd said. “It’s life changing. It makes you feel like there’s somebody who cares about you and who’s right there with you even though you don’t know them. And they’re saying, ‘We’re going to help you out and you’re worth it. You can do this.’ It gives you hope.”

For Rutherford-Donner, it was important to meet her scholarship recipient and develop a personal relationship.

“For me, it isn’t just giving the money; it’s giving the chance,” she said. “You can’t feel that unless you get to meet the person that you’re helping.”

“She’s an angel,” Hurd said as she fought back tears. “She literally changed a lot of my perspective, because there is so much in me that wants to give up, because it’s so hard. But I’m doing really well and she’s pushing me to do better. She’s done so much with her life. I want to be there one day.”

“You will be. You’ve got the drive,” said Rutherford-Donner. “There are so many single parents who would be fantastic nurses if only someone would give them a leg up. Someday Micah will be sitting here doing her own scholarship.”

“I will. I definitely will,” Hurd replied. “I will be taking up her legacy and saying, ‘This is for Joyce.’”