Wright State University research that shows emerald ash borer, which is destroying ash trees in a large swath of the United States, can also successfully complete development on olive trees was featured on Entomology Today.

It highlighted the research that was published online May 23 in a peer-reviewed journal called the Journal of Economic Entomology.

Entomology Today is a website of the Entomological Society of America, whose more than 6,000 members from around the world study insects, their importance, and their impact on the world’s population. Members include educators, extension personnel, consultants, students, researchers, and scientists from agricultural departments, health agencies, private industries, colleges and universities, and state and federal governments.

Biology professor Don Cipollini, director of the Environmental Sciences Ph.D. Program, has found that the invasive green beetle can feed and successfully develop into adulthood on stems of the Manzanilla olive tree, a Spanish variety that yields green table olives and is grown widely around the world.

“We are showing in this experiment that emerald ash borer indeed can complete development on olive,” said Cipollini. “It would add a potential pest to the olive cultivation industry. If we see this happening in nature, it could be a huge deal.”

Cipollini, who has been studying emerald ash borer for a dozen years, announced in October 2014 that the beetle had spread to white fringetree and suggested that the insect may attack other close relatives. 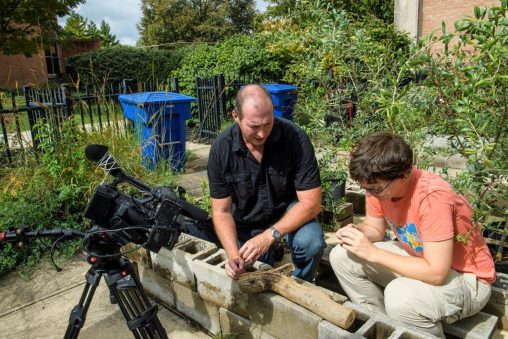 Native to Asia, emerald ash borer was first found in the United States near Detroit in 2002. It is believed to have been in ash wood used to stabilize crates during shipping and may have arrived without notice a decade earlier.

So far, the insect has spread in all directions, killed hundreds of millions of ash trees and threatens to kill most of the 8.7 billion ash trees throughout North America. It is estimated that the borer will have caused $10 billion in economic damage by 2019.

Cipollini has been working with colleagues to come up with new strains of ash trees that would be resistant to the insect. With colleagues and students, he has co-authored 15 publications on the insect, with several others in review or preparation.

Cipollini acquired a stem of the Manzanilla olive tree from collaborators in California and inoculated it with emerald ash borer eggs from a Michigan laboratory of the Animal and Plant Health Inspection Service, an arm of the U.S. Department of Agriculture.

Eggs were placed on the stem in February, and the larvae were allowed to feed on it for about two months. Beginning in April, Cipollini and Donnie Peterson, an environmental sciences Ph.D. student from Black River Falls, Wisconsin, exposed them to cooler temperatures for two months to simulate winter in order to facilitate their development.

Some of the larvae were able to chew deep into the wood and form pre-pupal chambers, where they grew into adult beetles. In early September, after being returned to room temperature for two months, several beetles began to bore their way out of the stem.

On one particular day, Cipollini and Peterson were huddled over the stem, which had been placed atop a cinder block outside the greenhouse at Fawcett Hall. A beetle was slowly boring a hole through the bark from the inside. Its head was bobbing and legs flailing as it tried to free itself.

“It’s too early to speculate on how much of a problem the borers would be for olive trees even if they do attempt to use them as a host,” said Cipollini. “These trees are tough. They can live to be 1,000 years old. But there are certain pests that can impact or kill them. We just don’t know how damaging this could possibly be.”

Cipollini did the experiment with an olive tree because it is a close relative of white fringetree, which he recently found to be vulnerable to emerald ash borer. Both trees are in the same plant family as ash trees.

The first trial was done in the spring of 2015 on small stems of potted olive trees with a previous environmental sciences Ph.D. student, Chad Rigsby of Springfield, Ohio. Three weeks after placing eggs on the tree, the researchers peeled back the bark and found a number of living, feeding larvae.

“That was the first ‘aha’ moment,” said Cipollini. “It was ‘Holy cow’ and ‘Oh no.’ It’s one of these things where it’s very scientifically interesting, but concerning at the same time. It signaled that more work needed to be done and immediately.”

A second laboratory test on stems from California was done in the summer of 2015 and had the same result. The most recent test was on a larger olive stem that would last longer in the lab and be a better food source for the larvae.

Cipollini and Peterson have tested the vulnerability of only a few varieties of olive trees to the ash borer. However, they have acquired several additional varieties of live olive trees in pots in order to expand their scope. So far, they have observed feeding by larvae on live trees of some varieties that was significant enough to injure the trees.

Cipollini plans to next determine whether adult ash borers are attracted to olive trees in the first place, will lay eggs on the trees in the wild and can survive by feeding on the leaves.

“This is entirely a laboratory project at the moment,” he said. “We have not yet observed anything happening out there in the wild.”

The U.S. olive industry is relatively small but geographically widespread. Most olives are commercially grown in California, but they are also grown in Arizona, New Mexico, Florida, Georgia, Texas and Oregon.

“The olive industry is already battling a number of pests, including the olive fruit fly,” Cipollini said. “This would not be good news for that industry.”

He said emerald ash borer is also pushing its way into Europe and that ash trees overlap with olive trees in the Mediterranean basin.

“So it is certainly possible that emerald ash borer could contact olives in major olive-growing regions through its use of ash trees,” he said.

Cipollini presented these results at a USDA-hosted emerald ash borer research and technology development meeting in October at the Ohio Agricultural Research and Development Center. He is also preparing a paper for publication with Rigsby and Peterson as co-authors.