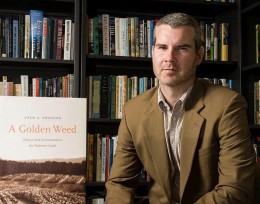 Few know that one of the nation’s first gold rushes took place in Georgia during the first half of the 19th century.

Despite the historical distinction, a Wright State environmental history professor called the era an ugly chapter of Georgia’s past.

Like the better-known gold rushes in California and Alaska, the Georgia gold rush has been romanticized, shaped by the myth of Appalachian “exceptionalism,” said Drew Swanson, who holds a University of Georgia doctorate.

But it wreaked enormous environmental damage in the north Georgia mountains many people think of as pristine, explained Swanson in a recent talk.

It was also an underlying reason for the forced eviction of Cherokee Indians and the Trail of Tears, Swanson recently told a packed auditorium in UGA’s Russell Libraries Building, where librarians with the Hargrett Rare Books and Manuscripts Library have mounted an exhibit on Georgia’s gold rush.

The centerpiece of the exhibit is a collection of 62 gold coins — an example of every gold coin produced from 1829 to 1861 by a federal mint operating in Dahlonega. The mint only produced gold coins in denominations from $1 to $5.