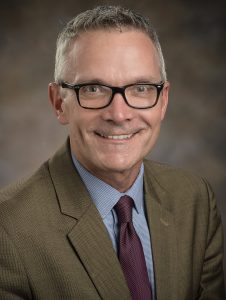 Tim Littell, executive director and associate dean of student success, received the 2017 President’s Award for Excellence in Leadership because of his ability to manage a significant role in the university and for his skills as a mentor and role model for everyone around him.

Jacqueline Neal, assistant dean of the College of Science and Mathematics, said Littell has inspired her with his ability to take risks and lead with courage.

“Tim has mentored me through difficult challenges and culture change,” she said. “He has taught me to hear the music and to pay attention to changes that require shifts in delivery and adjustments in attitude and behavior.”

Littell oversees and manages much of the processes involved in University College, including Academic Advising, Foundation Studies and the Academic Success Centers. He supervises a large team of employees, many of whom are advisers. As this is an integral part of the university’s mission and student success, Littell is responsible for working with the colleges and many of the units on campus. His job involves strategic planning, creativity, strong communication and collaboration, transparency and commitment.

In addition to fostering an environment of professional improvement, Littell has played a crucial role in the development of automated solutions aimed at modernizing certain aspects of the advising process. Under the direction of Provost Thomas Sudkamp, Littell has served as the point of contact for the Education Advisory Board. Recent outputs of this effort included the development and implementation of the Raider Academic Progress System.

Ayse Sahin, chair of the Department of Mathematics and Statistics, said she has worked with Littell to design and launch a co-requisite remediation initiative in mathematics.

“Throughout our work together, Tim brings to our partnership his deep understanding of our students’ challenges and strengths and a command of the state-of-the-art tools and structures to support student success,” Sahin said. “He has worked tirelessly to design and build a necessary and cutting-edge infrastructure in the university.”

Littell’s contributions to the university go far beyond academic advising. He has been instrumental in the vision and execution of programming and services in the Student Success Center. A few of his notable accomplishments include the Math Studio, Accelerated Learning Program and Raider Academy. The Accelerated Learning Program provides co-requisite remediation in English composition and mathematics that has had positive outcomes on the pass rates of students. In addition to showcasing his ability to execute impactful programs, the Accelerated Learning Program highlights Littell’s approach to campus-wide collaboration. He has successfully navigated the challenges of program implementation across units and departments.