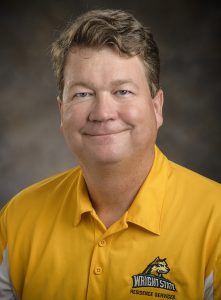 Wray VanVoorhis, associate director for facilities in the Office of Residence Life and Housing, received the 2017 President’s Award for Excellence in Service because of his honest and hardworking personality and his respect for his colleagues and students.

In the words of Jennifer Attenweiler, associate director for residence life, VanVoorhis is honest, hardworking, dedicated, loyal and humble.

“Wray tells students and staff the truth,” Attenweiler said. “He values us all enough to tell us how it is because he truly cares about our department and giving our students what they deserve.”

VanVoorhis will often work after hours, on weekends and very early in the morning.

“His work is never done and yet he doesn’t complain,” Attenweiler said. “He has worked long hours for as long as he has been here and won’t leave until the job is done.”

During Move-In Day, VanVoorhis double and triple checks student rooms to ensure they are set up just right. He is not afraid to get his hands dirty and can often be found helping install a new water heater or working on a paint job. He will also help students with personal fixes in their rooms, even those that do not fit in his job description. He does this work without recognition and doesn’t seek out praise.

Jill Rarick, administrative support coordinator for residence life and housing, said VanVoorhis is always on the lookout to ensure accessibility at Wright State. For instance, after snow plows come through to clear lots and sidewalks, Vanvoorhis and his maintenance team clear snow mounds so that students in wheelchairs and scooters can have a clear path. O rainy days, VanVoorhis has used the water hose and power washer to remove mud from students’ wheelchairs or scooters. Not only does this prevent mud damage in housing and classrooms, it restores students’ dignity by enabling them to attend their classes and travel to their dorm or apartment independently.

VanVoorhis can repair just about anything and is very good with computers and paperwork. He works with the computer programmers to make updates and changes. He maintains the databases and inventories for locks and keys to ensure the safety and security of students’ residences. He also tries to teach and train whenever he can. He has helped students with their personal vehicles by showing them how to check or add oil or change their plates or tags.

One of VanVoorhis’ strongest characteristics is that he is an amazing teammate. While he loves the individual projects he works on, he is a supportive supervisor and always offers a helping hand. He studies his craft and knows history of Wright State.

VanVoorhis is important to Wright State and the Office of Residence Life and Housing because of his desire to make the university and the department look good at all times. He believes strongly in customer satisfaction and will do anything in his power to help everyone enjoy what Wright State has to offer.