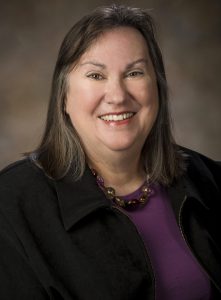 Lisa Burke, an accounting clerk in the Division of Students Affairs, received the 2017 President’s Award for Excellence for Leadership because of her kind demeanor and her ability to oversee the budget of several organizations on campus, including the Asian and Native American Center, the Bolinga Black Cultural Resources Center, the Office of LGBTQA Affairs, Office of Latino Affairs, Veteran and Military Center and Women’s Center.

Pam Davis, the business manager of student affairs, said Burke’s leadership in the Student Union and Campus Recreation area of financial accountability excelled every year. Her optimistic leadership has been more noticeable this year, when seven units joined the Division of Student Affairs.

Davis and Burke worked together on a Banner Boot Camp Series, which trained staff to use the Banner Finance system to manage their finance.

“It has been extremely important, yet prosperous, for Lisa to act as my sidekick to assist our division in creating a weekly series of Student Affairs Business Team Banner Boot Camp,” Davis said.

“I firmly believe this series was highly successful due to Lisa’s regular daily interactions with the divisional staff to determine the access each needed, what processes were unknown or not handled appropriately, how our future could be more efficient, which resources could be shared and developing a rapport with each of the units joining our division,” Davis said.

Bethany Groves, one of Burke’s student workers, said she learned a lot about Banner Finance from Burke.

“Lisa spent days sitting with me answering any questions I had,” Groves said. “She had much more important work than answering my questions. This didn’t stop her. She was determined to make sure I understood as much as I could. She never got frustrated with me, she would just find a new way to explain it.”

“Lisa did to me what she has done to so many staff members throughout the university — she made me confident in myself and know I could come to her with any questions,” Groves said. “She was full of energy and very lively. It was a refreshing change to get the opportunity to work with someone who not only shows excitement and life radiating from within herself but also by putting it into everyone around her.”

While her work varies greatly, Burke’s assistance has always been appreciated by her colleagues.

“It has been a privilege to be the supervisor of Lisa Burke and watch her development of future leaders. Her leadership within the Division of Student Affairs has been genuinely appreciated this year as we look forward to a brighter future at Wright State University,” Davis said.