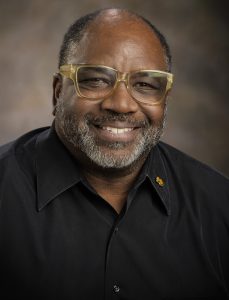 Will Jones, Wright State University photographer, received the 2017 President’s Award for Excellence for Human Relations for his kind and cheerful demeanor and his ability to make anyone feel comfortable during a photo shoot.

Jones is not only a photographer; he’s also a therapist and a cheerleader. The majority of his work involves photographing students who often feel anxious in front of a camera. As soon as they are introduced, Jones begins asking the student what they like.

“I swear the man knows at least a little about every subject under the sun,” said Wendy Barhorst, manager of marketing in the Division of Enrollment Management. “As soon as the student hits on a topic he has some knowledge of, look out! The student’s worries soon disappear because Will has a way of immediately forming a connection with them. It is really fun to watch.”

Barhorst described Jones as a cheerleader because he is always aware of new and exciting things going on at Wright State.

“He doesn’t keep that information to himself,” she said. “He is sure to share all of the cool stuff going on around campus with anyone that might be interested. He is a great source of Wright State knowledge and makes people feel good about their decision to attend or work here.”

Sandi Holdheide, director of student affairs at the Lake Campus, said Jones has traveled to Celina whenever he is needed to photograph events and tell the Lake Campus story.

“Wright State is built upon the innovative spirit,” Holdheide said. “Will is a master at capturing this foundation through his camera.”

When any student, faculty or honored guest of the university is showcased for an achievement, Jones has been there to document it. He makes his subjects comfortable and excited about the prospect of being captured in the lens of his camera to document their accomplishments.

“Mr. William Jones is a Wright State University treasure,” said Gary LeRoy, associated dean of student affairs and admissions in the Boonshoft School of Medicine. “This gentle and humble human being is certainly deserving of this opportunity to allow us to focus our attention in his direction by bestowing him with this prestigious recognition.”

“His casual chatter and openness allow the subject to feel at ease and open up to the experience, enabling the university to benefit from the beautiful and professional shots that capture not just an image, but a feeling and a sense of being in the moment,” Halberg said.

Jones is also a champion of inclusiveness. His photography highlights the everyday beauty and harmony that is Wright State University. From gender to ability, race to religion, and youthful inexperienced to seasoned veteran, all are welcome and gracefully captured in his lens.